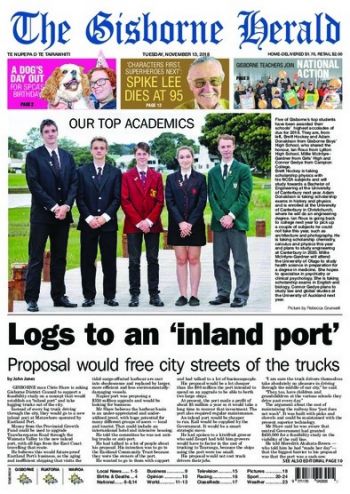 Front Page of the Gisborne Herald

Spike Lee is still alive; comic book legend Stan Lee, however, died this week. The headline was in the top center of the front page for Nov. 13 and included a picture of Stan Lee.

iMediaEthics saw the front-page error highlighted on Twitter; we found the full front page on the Herald‘s website. Gisborne is in northeastern New Zealand.

iMediaEthics wrote to the Herald to ask how the error occurred and how many readers it has heard from over the mistake. Editor Jeremy Muir told iMediaEthics by e-mail, “It was a mistake by the sub-editor who did our banner late yesterday morning and unfortunately it was missed by the proofreader. We have one print edition – we saw the mistake soon after it was printed and didn’t have the foresight to correct the pdf version of the paper on our website. ​(Hard to predict something like this going viral, maybe we should have seen the possibility though.)”

He added, “A few readers have got in touch; many more commenting on it in social media. Huffington Post and FoxNews.Com sought comment, as has NewsHub and Stuff.co.nz in New Zealand.” Muir also provided iMediaEthics a copy of today’s (Nov. 14) print edition page 2, which addresses the error. See it below:

UPDATE: The Gisborne Herald also published on Nov. 15 this editorial about the mistake. “It was a silly mistake, no doubt about that. We saw the banner item had misnamed Stan Lee as Spike Lee soon after Tuesday’s paper was printed, cringed, discussed the need to ensure the banner is always checked properly, and got on with the afternoon,” editor Jeremy Muir wrote.