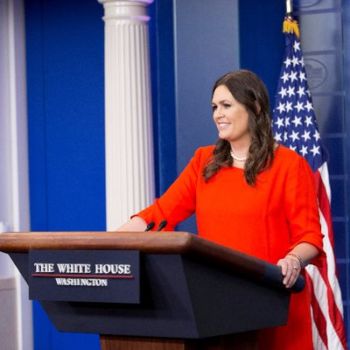 The Los Angeles Times‘ David Horsey described White House spokesperson Sarah Huckabee Sanders as a “chunky soccer mom.” After the characterization was widely criticized, Horsey removed the description and apologized to readers and Sanders. In a note atop the article, Horsey wrote,

“I want to apologize to Times readers — and to Sarah Huckabee Sanders — for a description that was insensitive and failed to meet the standards of our newspaper. It also failed to meet the expectations I have for myself. It surely won’t be my last mistake, but this particular error will be scrupulously avoided in my future commentaries. I’ve removed the offending description.”

The characterization was published in a Nov. 1 opinion piece, “Sarah Huckabee Sanders is the right mouthpiece for a truth-twisting president.” The article’s first two paragraphs originally read, according to a Google Cache,

“Sarah Huckabee Sanders does not look like the kind of woman Donald Trump would choose as his chief spokesperson. Much like Roger Ailes when he was stocking the Fox News lineup with blond Barbie dolls in short, tight skirts, the president has generally exhibited a preference for sleek beauties with long legs and stiletto heels to represent his interests and act as his arm candy.

“Trump’s daughter Ivanka and wife Melania are the apotheosis of this type. By comparison, Sanders looks more like a slightly chunky soccer mom who organizes snacks for the kids’ games. Rather than the fake eyelashes and formal dresses she puts on for news briefings, Sanders seems as if she’d be more comfortable in sweats and running shoes. Yet, even if Trump privately wishes he had a supermodel for a press secretary, he is lucky to have Sanders.”

Those two paragraphs have been replaced with the simple sentence, “Donald Trump is lucky to have Sarah Huckabee Sanders as his chief spokesperson.” iMediaEthics has written to Horsey and the Times to ask how long the description was published, if it heard from Sanders or the White House and how many readers complained. Times‘ spokesperson Hillary Manning declined to comment beyond the apology and noting the “offensive language has been removed.”

Below, read tweets critical of the article.

Things that are true at the same time:
1) Sarah Huckabee Sanders is an unabashed enemy of the truth
2) This profile of her is sexist trash pic.twitter.com/3ti2NWqGgZ

I don't like Huckabee Sanders but this piece is awful. Her looks, her weight and clothing are irrelevant. Sexist.https://t.co/Z9WlCrYtou

why do men ALWAYS feel the need to comment on how women look? This, on Sarah Huckabee Sanders, is truly vile https://t.co/eQ9tLmXswQ pic.twitter.com/T4wfWFuhAI

I think press secretary has no credibility and lies daily. But this is sexist. Would you have called Spicer pudgy? https://t.co/OEjvwNXt48

Why the hell didn't an editor cut this lede abt Sanders being a "slightly chunky soccer mom"? Mean. Unnecessary. https://t.co/J8Kjax1Nnf

When you open a piece buy insulting a woman's looks you have already lost me.https://t.co/ibmbgAl6vu

genuinely confused as to how this column got past an editor. https://t.co/mVJ0sQNpw9 pic.twitter.com/u5Mnue3eTn