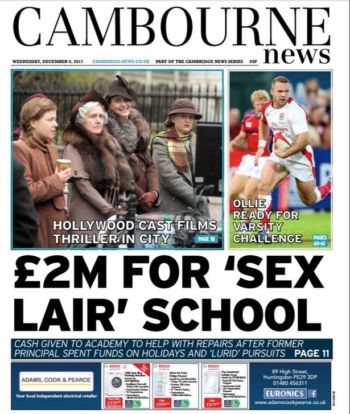 Last January in St. Ives, England, a man in a jealous rage attacked his ex-girlfriend and her new boyfriend with a knife, killing the boyfriend, Andrew Hasler. A neighbor, Andrew Phelps, intervened, stopping the attacker from further violence, and was named recipient of “one of the country’s highest bravery awards” for his actions.  The Cambridge News reported on this, with its 2017 story describing the crime scene as a “bloodbath” and a “murderous rampage.” It also reported graphic details about the fatal wounds of the man who was killed.

Helen Frazier, Hasler’s mother, was upset with the story and complained to the UK press regulator, the Independent Press Standards Organisation (IPSO), arguing the article and details in it amount to an intrusion into grief. Further, she claimed the article was inaccurate because she didn’t think her son’s actions to attempt to stop the attacker were featured in the story, and because Phelps hadn’t received the award yet.

In its defense, the Cambridge News explained that the committee giving the award to Phelps confirmed that he had agreed to letting the award be publicized. The newspaper offered to apologize privately to Frazier, though, and removed the photo of the attacker.

The Independent Press Standards Organisation rejected Frazier’s complaint, ruling that it was fair game to report on the attack, and the details included to summarize Phelps’  actions were “not gratuitous.” The visuals published by the Cambridge News weren’t insensitive either, IPSO explained, because they only showed the attacker in custody and a video of where the attack took place.

Further, it isn’t inaccurate to report someone was named an award recipient if they haven’t physically been given the award, IPSO found. And, it’s not inaccurate to call a knife attack on two people that kills one of them a “murderous rampage.”

iMediaEthics has written to the Cambridge News and Frazier for their response to the ruling.