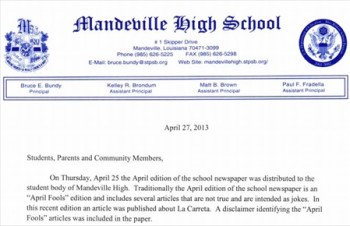 A Louisiana high school’s student newspaper published a story that local restaurant was being shut down and possibly sued over huge health violations, like selling old, re-used food, including “months old” cheese dip.

One heck of a scoop, right?

Wrong. The story was actually part of the newspaper’s April Fools’ Day edition, but the issue wasn’t distributed until April 25. The problem was the jokes were lost on a lot of readers due to the 24-day delay.

The article reported “Food Inspector” Shawn Stevens was shocked by the La Carreta restaurant kitchen. He’s quoted as saying, “I found they are re-using the food that people didn’t eat and making it seem as if they had just cooked it,” according to the Advocate.

“It is amazing that what seemed to be a delicious restaurant is actually a filth house,” the Advocate reported the phony story said.

After the story went viral, and was later exposed as a fake, the school — Mandeville High School — issued a letter of apology from its principal, Bruce Bundy, admitting that “Everything in the article is unequivocally false.”

According to Bundy, “traditionally the April edition” of the student newspaper the Crescent features April Fools’ Day prank stories.  While the edition this year did feature “a disclaimer identifying the ‘April Fools’ articles,” the story on La Caretta was “taken out of context and re-distributed by means of social media.”

“What was really just a joke on April Fools’ Day is causing us a lot of problems.”

As Bundy explained in his apology letter sent to “students, parents and community members,” the school “publically [sic] apologizes to La Carreta,” and wanted help letting people know the article was phony.  Bundy’s letter even somewhat served as an endorsement of the restaurant, writing: “La Carreta continues to be open for business and is providing the excellent quality of food and service they have provided for many years.”

According to the (Baton Rouge) Advocate, La Correta co-owner and attorney Robert Landry said the newspaper and school “understand that it was a mistake” and have “bent over backward to apologize.”

The Advocate added that “Landry said that he doesn’t think the primary owner, Saul Rubio, is contemplating any legal action.”  La Correta “has nine Louisiana locations,” according to the Advocate.

iMediaEthics has written to Mandeville High School principal Bundy, who re-directed us to Meredith Mendez, the Director of Public Information for St. Tammany Parish School System, to ask for a copy of the article in question and to ask:

We’ve left phone and email messages with La Carreta seeking comment and will update with any response.

Check out all of iMediaEthics’ reports on April Fools’ Day hoaxes.