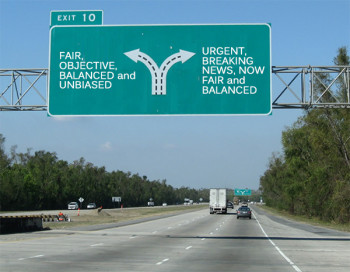 What are the road rules of journalism?

“The road signs that used to say ‘fair,’ ‘objective,’ ‘balanced and unbiased’ have been removed from a lot of the highways,” said Fred Young, former senior vice president of news for Hearst-Argyle Television. “They’ve been replaced with signs that read ‘now,’ ‘urgent,’ ‘breaking news’ and ‘fair and balanced.'”

That guidance was among the points brought up by Young, who spoke Oct. 21 at a media ethics event at Arizona State University, which promoted the importance of accuracy and balance.

Young added, “Use major ethical challenges as teaching or learning opportunities. Remember there are no rules of ethics. Be flexible. One question to always ask yourselves as young journalists or mature journalists, ‘What can we do better the next time?’”

Young touched on news in media ethics like the coverage of the Ray Rice video, the suspension of ESPN commentator Stephen A. Smith, ESPN’s suspension of Bill Simmons, NBC’s Dr. Nancy Snyderman’s breaking her voluntary quarantine, the death of Robin Williams, Michael Brown’s shooting in Ferguson, Missouri, the Boston Marathon bombings, and coverage of Ebola.

On the death of Williams and the media’s decision to send helicopters to show live footage of his house, Young said: “I don’t know if that’s an ethical issue, a taste issue, a coverage issue, I think it’s a stupidity issue.”

“Did we need to know that? Did the media go too far?” Young asked, when the media reported the details of how Williams killed himself.

He also presented some tips for “getting it right” in reporting. See below:

The free event, a Must See Monday event, was held on Oct. 21 at ASU, focused on ethics in journalism and social media,ASU student media publication the Downtown Devil reported. See video of Young’s talk.

Peter Bhatia, in attendance at the event, added that “I would much rather as a news organization be right than be first in this day and age, because a scoop lasts about 30 seconds,”

Bhatia, the former executive editor of The Oregonian and the current Edith Kinney Gaylord visiting professor in journalism ethics at Arizona State University, called for journalists to emphasize “caution” over “speed,” especially on social media so that false information isn’t spread.

“There are so many horrible examples of things being tweeted out that weren’t true,” he said, pointing to the mis-reporting of Gabby Giffords‘ shooting and Joe Paterno’s death.

Bhatia added that he views Twitter as a “tipsheet” for ideas and information and advised “caution” in tweeting. Bhatia left The Oregonian for ASU in March.