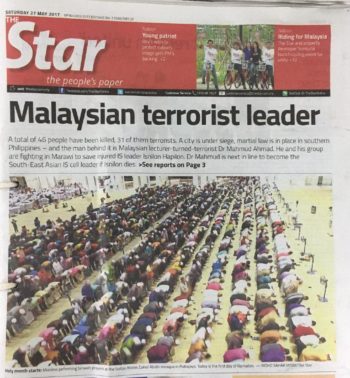 The Daily Star in Malaysia published a photo of Muslims praying next to a headline, “Malaysian terrorist leader,” suggesting the Muslims in the image had ties to terrorism.

The mistake, in the Daily Star‘s May 27 edition, occurred because the newspaper traditionally publishes a photo of Muslims praying on its front page to mark the first day of Ramadan, according to independent English-language Malaysian news site Free Malaysia Today. The annual photo was inadvertently paired with the headline on the front page, which was linked to a page 3 story about terrorism.

The Star‘s editor-in-chief Datuk Leanne Goh Lee Yen and executive editor Dorairaj Nadason were suspended after the incident during an internal investigation, the Star announced in a May 31 statement on its website. “The editors involved and the Star Media Group will cooperate fully with the relevant authorities in investigating the issue, especially the Home Ministry and the police,” the Star said. 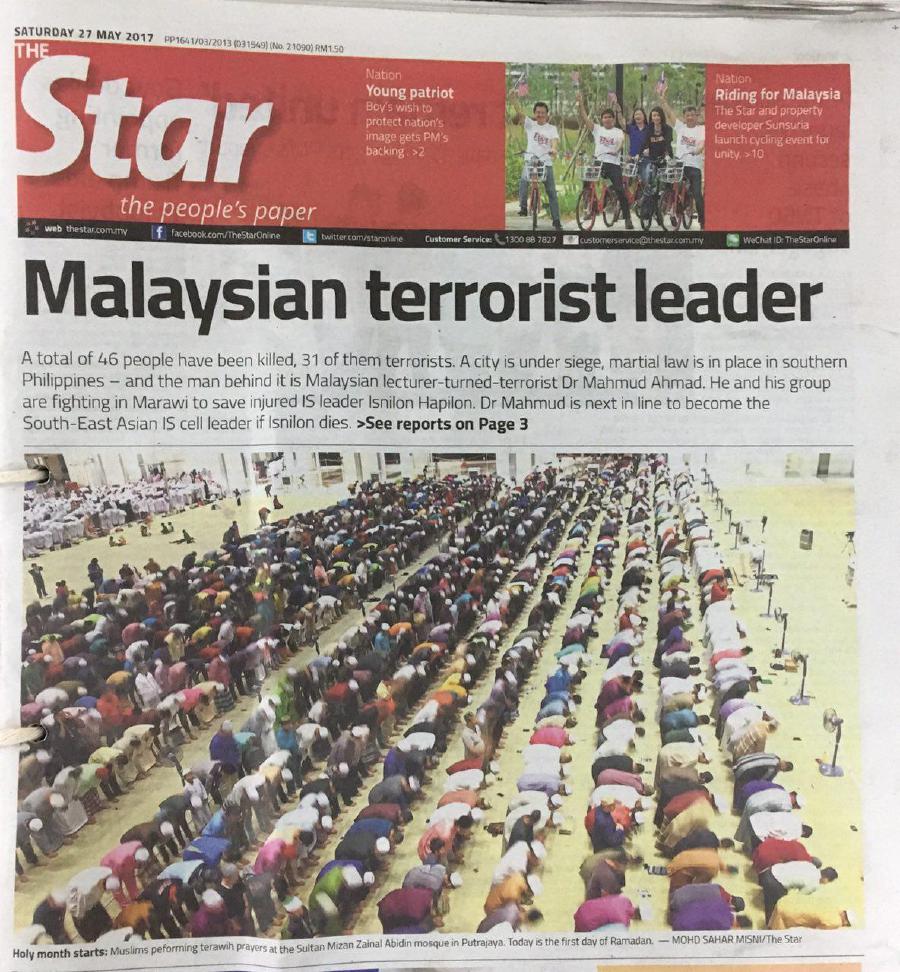 The Daily Star issued an apology on its website that reads:

“We refer to the front page of The Star on Saturday May 27.

“It has been the practice of The Star to respect the first day of Ramadan every year and to place the picture of Muslims at the first terawih prayers on the front page of the paper. This has been done over the last decade or so.

“This year, there was an unfortunate coincidence of the lead story being of a terrorist leader, that led to many linking the headline and the picture, which was never the intention of the newspaper.

“On hindsight, The Star should have been more discerning and sensitive to the feelings of our Muslim readers.

“We sincerely apologise for the error of judgment on our part.”

iMediaEthics has written to the Daily Star to ask how the error occurred, how many complaints it received and if the apology was published in print. We’ve also contacted the Center for Independent Journalism, Malaysia, to ask if it received any complaints about the headline and photo juxtaposition.

Its too obvious and the editor didnt notice that?! @staronline https://t.co/wRUhlId7bg

This front page could be misleading unless the reader bother to read the caption below the picture. @staronline pic.twitter.com/94bR0fidTY

there was a clear line between the headline and the pic, which had its own caption. as there was between the pic and the ads below it.

Is everyone in The Star associates praying muslims as terrorists ?