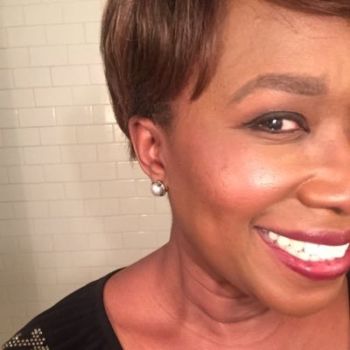 Joy Reid, the popular MSNBC host, said she doesn’t think she wrote the homophobic blogposts that were attributed to her from her old blog, calling them “completely alien to me,” as well as “outright weird and hateful.”  That said, she admitted that while she thinks the posts were fabricated, “cybersecurity experts … have not been able to prove it.”

“I genuinely do not believe I wrote those hateful things,” she said. “But I can definitely understand, based on things I have tweeted and have written in the past, why some people don’t believe me.”

Reid also apologized to Ann Coulter and the transgender community for her anti-transgender tweets about Coulter.

Reid has been mired in controversy this week after Mediaite found homophobic blogposts on her old blog. In December, Reid apologized for her homophobic blogposts about then-Florida governor Charlie Crist, written in the years 2007-2009. But, when confronted by Mediate, Reid denied writing the blogposts that just resurfaced.

The blogposts Mediaite asked Reid about included a one that said she didn’t want to see Brokeback Mountain because “I didn’t want to watch the two male characters having sex.” She added, “Does that make me homophobic? Probably.”  Another blogpost Reid denied writing said that homosexual sex was “gross” and “immoral.” (See more quotes from the blogposts on Mediaite.)

Reid told Mediaite that “an unknown, external party accessed and manipulated material” from her old blog to post “offensive and hateful references that are fabricated.”

iMediaEthics wrote to Reid’s lawyer and MSNBC to ask how many and which blogposts Reid alleges were falsely attributed to her, and if she is continuing to have her blog investigated or if she is ending it with her statement this morning.

CNN argued though, “Parts of the case made thus far by Reid, her lawyer and one of the cybersecurity consultants she hired — that someone obtained her password for the blog and then made changes to it — are plausible from a technological perspective.”

Yesterday, The Daily Beast suspended Joy Reid as a columnist while it investigates homophobic blogposts attributed to her.

In a memo which CNN’s Oliver Darcy posted on Twitter, the Daily Beast‘s Noah Shachtman said its reporters are investigating Reid’s claim about her site being hacked but “in the meantime, we’re going to hit pause on Reid’s columns until we’re satisfied” with the Daily Beast‘s investigation.

"I genuinely do not believe I wrote those hateful things … But I can definitely understand, based on things I have tweeted and have written in the past, why some people don't believe me." pic.twitter.com/PWjdPfs5KB

Daily Beast exec editor @NoahShachtman sent this note out to staff today regarding the @JoyAnnReid situation. He says reporters @kpoulsen and @maxwelltani are investigating her claims and examining her history: “In the meantime, we’re going to hit pause on Reid’s columns…” pic.twitter.com/eJwwFeHSCn