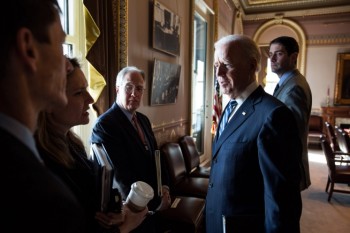 New York Times columnist Maureen Dowd stands by her Aug. 2 column claiming that Beau Biden, just before dying to cancer, told his father, Vice President Joe Biden, to run for President. Dowd defends her statement despite the fact that Joe Biden, who was there when his son died, raised questions about the accuracy of the column.

Dowd wrote in her Aug. 2 column that Beau Biden “tried to make his father promise to run” at a conversation at a table “when Beau realized he was not going to make it.”

After being asked specifically what his son had wanted, Joe Biden told CBS News’ 60 Minutes

“Well, first thing I’d like to do, and you’re being very polite the way you’re asking me the question because some people have written that, you know, Beau on his death bed said, “Dad, you’ve got to run,” and, there was this sort of Hollywood moment that, you know, nothing like that ever, ever happened. Beau from the time he was in his 30s — or actually his late 20s — was my, he and Hunter were one of my two most reliable advisers. And, Beau all along thought that I should run and I could win. But there was not what was sort of made out as kind of this Hollywood-esque thing that at the last minute Beau grabbed my hand and said, “Dad, you’ve got to run, like, win one for the Gipper.” It wasn’t anything like that.”

“The column is accurate,” Dowd maintained to Sullivan, noting “I never reported a last-minute deathbed scene where Beau grabbed his father’s hand. In fact, my column recounted a conversation they had seated at a table after Beau knew his prognosis was bad. He was terminally ill.”

Sullivan agreed, and pointed to media coverage that seemingly dramatized the event. In fact, Sullivan found that while Dowd’s’ column appears to match with what Biden himself recently described, a New York Times news story exaggerated the tale a bit and she called for a correction.

That Aug. 1, 2015 article, “Joe Biden Said to be Taking New Look at Presidential Run,” stretched Dowd’s column of a conversation at a table to a conversation “as Beau Biden lay dying from brain cancer.”

iMediaEthics wrote to the Times to ask if it will post a correction but hasn’t heard back. However a correction was posted today reading:

“An article Aug. 2 about Vice President Joseph R. Biden Jr.’s deliberations on whether to run for president referred incorrectly to Maureen Dowd’s account of a conversation between Mr. Biden and his son, Beau, who soon before he died from brain cancer in May, encouraged his father to run. Ms. Dowd reported that they sat at a table while Beau was sick and discussed the matter, not that they spoke as he ‘lay dying.'”