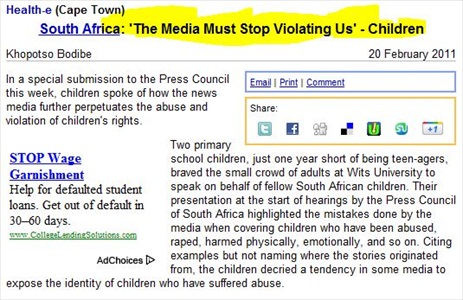 Two South African children called on the media to be more careful in its reporting on children. (Credit: Health-e)

The children — “two primary school children, just one year short of being teen-agers,” complained to the press council about media reporting on “children who have been abused, raped, harmed physically, emotionally and so on.”

Health-e focuses on “HIV/AIDS, public health and issues regarding health policy and practice in South Africa.”

According to the children, South African media has reported on children in those situations and identified the children involved, albeit inadvertently.

One of the students, Brendan Molotsi, explained:  “They (the media) took a picture, but they blurred it.  But they mentioned the child’s father and mother, which indirectly if you know the child, you know that it’s him or her.”

Ronell Singh,”head of the children’s programme at Media Monitoring Africa,” reportedly commented that identiying child victims of abuse has a “huge” impact on the child. Singh stated:

“When the media makes a mistake by identifying a child it lies with them long after the story has died. So, if a story is published today 10 years down the line or 20 years down the line, the repercussions of the story could still affect the child. The child could still be known as the one who was raped and, maybe, isn’t married today because of that stigma that is attached. The same goes for emotional abuse. I think when we think of abuse, we always think of physical abuse. If a child is emotionally abused and if he is identified in the media, then that also sticks with the child and might need psychological help in the future.”

According to Health-E, the press council is “holding hearings for the review of the Press Code and discussions around the proposed formation of a Media Appeals Tribunal.”

StinkyJournalism is writing to Media Monitoring Africa and the South African press council for more information and will update with any response.

Meanwhile, the All Assam Forum For Childs Rights called on Indian media to be more sensitive in its reporting on children, the Assam Tribune reported.

“It has to be kept in mind that the dignity and rights of every child have to be respected in every circumstance. There is a need to sensitise the media here on children issues,” Father Lukose Cheruvalel, the forum’s chairperson, is quoted as saying.

Assam is an Indian state.  According to The Times of India, the forum is “an initiative by city-based NGO, Snehalaya, and “was formally launched in October.”

Father Lukose recommended the media serve in a children’s rights advocacy stance and protect children’s “right to privacy and confidentiality.”

Father Lukose specifically advised the media not to publish any information that could endanger children or identify sexual abuse victims. He stated:

“The media must desist from publishing the story or image which might put the child, siblings or peers at risk even when identities are changed or obscured.”

“The media should always change the name and obscure the visual identity of any child who is identified as a victim of sexual abuse or exploitation, a perpetrator of physical or sexual abuse, HIV positive unless the child, a parent or a guardian gives fully informed consent, charged or convicted of a crime.”

Whereas the U.S. Society of Professional Journalists general code of ethics for journalists advises that journalists minimize harm, UNICEF’s child-specific guidelines instead calls on journalists to “do not harm to any child.”  Further, journalists are advised not to discriminate or stage interviews.

ABC News was cited by StinkyJournalism in March 2009, for their exploitative photo gallery that graphically featured children from foreign countries and their diseases.

Also, in May 2010, we found fault with a Dutch newspaper interviewing a 9 year old boy from his hospital bed after a plane crash in Libya.