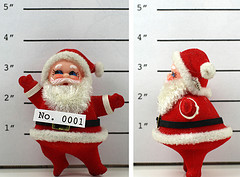 With some journalists lamenting that the media don’t take scientists seriously enough, Newsweek has now pointed out that some are taking them way, way too seriously. Now, they are attacking Santa Claus after the British Medical Journal published a humorous paper by Nathan Grills on Saint Nick’s less than exemplary health behavior.

Science journals occasionally publish holiday-themed stories that are either an outright farce, or obviously too fluffy to have been accepted into the magazine on their own merit. (We wrote about a disappointingly silly Halloween-themed “ghost” story in the New England Journal of Medicine this October). It shouldn’t be that hard to get the joke, but Newsweek reports, this Christmas, it was.

Every wire service carried a version of the report. The international wire services AFP and AP wrote that Grills had established a relationship between Santa belief and obesity, and that he also warned against sitting on Santa’s lap: it would lead to the spread of infectious disease.

Here’s the thing. The entire “study” was a joke. It was satire. You’ve heard of Christmas in July? Well, this was April Fool’s Day in December.

It wasn’t hard to get that the paper was joke-y, Merryman writes, but if anyone had looked at the report itself, and not just the press release, they would have seen that it was more than joke-ish. It really was a joke. Footnotes led to unrelated papers or yahoo pages, the piece is coauthored by an illustrator, and Grills never quantifies his claims about Santa’s influence on obesity, drinking, and seat-belt use. The article states that the piece was not peer-reviewed, and it appears in a section of the journal with several other, seemingly-satirical articles. According to Merryman, “when I asked Grills to tell me about the specifics of the correlation, he instantly replied that there was no research on point; it was just a joke.”

Beyond attacking Santa, the story also spawned a reaction against Grills, Merryman writes:

A reporter for the Atlanta Journal-Constitution blasted him with “Sometimes Scrooge has a medical degree and an Aussie accent.” Another editorial proclaimed that the report was “wasted science” and “downright Grinch-like.”

Around the world, Grills has been attacked as a mean-spirited Christmas killjoy.

We feel for Grills. It was obvious that this was a spoof paper, and according to Merryman, “Grills does not consider Santa to be an actual public-health menace. He isn’t a Grinch. And he isn’t trying to kill anyone’s belief in Santa.” The Newsweek story also points out that the AFP filed a new story saying Grills’ article was a joke, but never corrected their first piece.

At the same time, if science journals could refrain from publishing this stuff in the first place, they wouldn’t risk confusing susceptible journalists. In this case, it seems like the joke section was a clear indication. But in other instances, it hasn’t seemed so clear cut.  Less astute journalists shouldn’t have to wonder if science papers publishd in reputable journals are a farce, though they should, of course, check them.