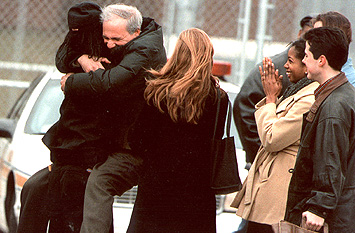 Upon being freed from death row on February 5, 1999, Anthony Porter lifts Professor David Protess in an embrace. Porter had come within 50 hours of execution before being exonerated with evidence developed by Protess and his reporting team. (Credit: Northwestern University)

In 1978, Anthony McKinney, then 18 years old, was sentenced to spend the rest of his natural life in prison after being convicted of murdering Donald Lundahl. Thirty-one  years later, Northwestern University journalism students working with the school’s Medill Innocence Project discovered enough new evidence to convince Judge Diane Cannon in Chicago that McKinney’s case deserved another day in court.

As Professor David Protess, director of the Medill Innocence Project, explains on the project’s website, the case had entered the “discovery” phase during which “each side requests evidence possessed by the other.” It was at this point that the Cook County state’s attorney subpoenaed a broad range of information from the Medill Innocence Project, including students’ grades, class syllabi, e-mail communications and unpublished student memos, among others.

According to a statement Protess made to the Chicago Tribune, the school has provided on-the-record interviews with witnesses conducted by the students.

The prosecutors, however, want to examine the students’ methods. In a statement given by a spokesperson to the New York Times, the prosecutors are trying to figure out if students thought they would receive higher grades “if witnesses they interviewed provided evidence to exonerate Mr. McKinney.”

In an email to Stinky Journalism, Protess explained that this is the first time he’s heard of prosecutors subpoenaing this type of information. “I’ve checked with the directors of more than fifty innocence projects around the country,” Protess wrote, “and this situation has not happened before. My students and I have been subpoenaed in two previous cases that resulted in the release of innocent prisoners (the Ford Heights Four in 1996 and Anthony Porter in 1999), but those subpoenas were narrowly tailored. The focus appropriately was on our published interviews and videotapes, and we complied without a fight. The current subpoena is absurdly overreaching, seeking information that is private and not relevant to the case…”

Protess is fighting the subpoena on grounds that he and his students are protected by the Illinois shield law for journalists, which prevents reporters from being forced to disclose information. The prosecutors claim that the students are not journalists, but rather an “investigative agency.”

Tim McGuire, the Frank Russell Chair for the business of journalism at Arizona State University’s Walter Cronkite School of Journalism and Mass Communication, questions the motivation for the subpoenas on his blog, “McGuire on Media.” He wonders whether “the prosecutors have any evidence that The Innocence Project students believed they would get better grades,” which, as of yet, they have not shown. Without reason to believe that students were motivated by grades rather than justice, he finds the prosecutors actions unlawful.

Furthermore, McGuire is dismayed by the attempt to delegitimize the work of the Medill Innocence Project student journalists. “Each university clinic program in America from Cronkite News Service, to Cronkite’s four day-a-week Newswatch to the Innocence Project to scores of others need the protection from harassment that is afforded journalists…Their great work IS journalism, no argument needed.”

McGuire likens the situation to the 1988 Supreme Court ruling in Hazelwood School District v. Kuhlmeier, which granted high school principals the right to control student newspaper content. McGuire writes, “To attempt to redeem itself for its ignorance and sloth on Hazelwood, the mainstream press needs to rally to protect and defend the Medill Innocence Project.” (Link in quotes original to McGuire.)

As Protess points out on the Medill Innocence Project website, there have been a dozen editorials supporting the project. Donald M. Craven, the interim executive director of the Illinois Press Association, told the New York Times, “Taken to its logical conclusion, what [the prosecutors are] trying to do is dismantle the project.” The Chicago Headline Club, a chapter of the Society of Professional Journalists, has also issued a statement protesting the subpoenas.

And this week, the American Society of News Editors, an organization with more than 600 members, released a statement which deems the subpoenas “a wide-ranging, unfounded sweep for information that we believe violates the Illinois reporter’s privilege statute and threatens key tenets of journalism and justice in this case.”

For continued updates about this case, check in with the Medill Innocence Project website.