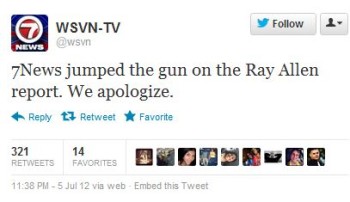 Miami’s WSVN-7 News based a July 5 report about NBA team the Miami Heat’s “potential signing of Ray Allen,” on a fake Twitter account posing as a Yahoo Sports writer.  Allen plays for the Boston Celtics and his agent announced days after the WSVN report that Allen had signed with the Heat.

But, Media Bistro’s TV Spy noted that “it doesn’t appear that Yahoo! Sports reported anything of the sort,” pointing to a fake Twitter account claiming to be a Yahoo Sports writer, Adrian Wojnarowski.

That account @WojYahoooNBA, notes in its bio “NOT NBA columnist for Yahoo! Sports and an NBA Insider for the NBC Sports Network. (PARODY).”

“Ray Allen is finalizing the final details of a 3 yr/11 Million Dollar with the Miami Heat and will sign it tonight. Sources tell Y!”

WSVN tweeted an apology July 5: “7News jumped the gun on the Ray Allen report. We apologize.”

Miami New Times noted that WSVN competitor WFOR criticized WSVN for its error in a July 6 blogpost, but the criticism, which included calling the error “its own ‘Dewey Defeats Truman’ moment,” has since been removed.  The blogpost didn’t name WSVN, only identifying it as “a loacl South Florida TV station.”

We have written to WSVN for more information about this incident and will update with any response.