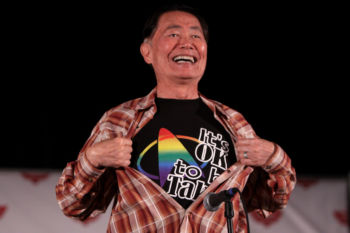 Actor George Takei may be best-known for his role in Star Trek, but in recent years, he has developed a significant social media following, with more than 10 million Facebook fans. He’s apparently been monetizing that social media popularity by sharing links to videos and stories from websites and news sites including Mic and Slate.

Earlier this year, Digiday reported that Takei uses “social influencer shop The Social Edge” to “suggest articles, schedule posts and analyze metrics” that he shares on his social media accounts.

But, after after an allegation of a 1981 sexual assault against Takei, which he denies, at least six sites have ended their relationship with the 80-year-old actor. Mic, one of the six sites, revealed that it had a financial relationship with Takei in its own news story this pasat week, adding that Slate, viral content site Upworthy, online magazine Good, science & tech focused site Futurism, women’s site Refinery 29 also had deals with Takei.

MediaEthics wrote to all six outlets for more information about their relationship with Takei.

At first, Mic‘s story reported that Takei was paid an average of $10,000 per Mic story he posts, but the media company updated after publication to clarify it doesn’t necessarily pay $10,000 per share. The news site wrote, “Mic saw an average of 1 million page views for posts shared on Takei’s Facebook page, and paid 1 cent per page view, [Mic‘s vice president of audience and analytics Rameez] Tase said. (Following the publication of this article, Tase offered the following clarification through a Mic spokesperson: ‘These were hypothetical descriptions of how these relationships work and not reflective of what Mic actually spends.’)”

Mike Grillo, the chief operating officer for Futurism, told iMediaEthics by phone that Takei only shared one post from Futurism and that after the allegation against Takei, they asked for their videos not to be shared by Takei. Noting that other sites might have different agreements or relationships with Takei,  he said that, at least in Futurism‘s case, the site started working with a third-party agency a little over a month ago. Futurism then sends the agency its videos that had been performing well, and the agency finds a prominent Facebook page to share the video. Grillo told iMediaEthics that Futurism doesn’t pay anyone; the money comes into play if any of the shared posts generate Facebook ad revenue.

A spokesperson for Good declined to comment but pointed to its tweeted statement saying it would “no longer partner with networks that use celebrities, including George Takei, to promote our content.”

A spokesperson for Refinery29 told iMediaEthics by e-mail, “Refinery29 worked with a third party service and never paid George Takei to distribute content. In light of the recent allegations made against Takei, Refinery29 has officially suspended engagement of any type.”

On Nov. 13, Takei shared a video from Mic, that didn’t have any disclosure of sponsorship.

On Nov. 9, Takei posted a Slate article without any disclosure if it was sponsored or not.

In light of the recent allegations about @GeorgeTakei, we will no longer partner with networks that use celebrities, including George Takei, to promote our content. The recent stories regarding multiple industries leave us deeply disappointed that so many men abuse their power.

News site the Outline noted that Takei’s undisclosed paid posts may be a violation of Federal Trade Commission and Facebook guidelines, because both mandate people flag if content or posting content was paid for. iMediaEthics has written to both the FTC and Facebook to ask. As per its practice of not weighing in on specific cases, the FTC told iMediaEthics it “does not comment on whether or not it’s looking into any particular company, individual, or practice.” In September, the FTC offered guidance on endorsements and social media shares of products, ultimately saying people should disclose when they are receiving money or positive benefits in exchange for sharing.

“If there’s a connection between an endorser and the marketer that consumers would not expect and it would affect how consumers evaluate the endorsement, that connection should be disclosed,” the FTC says on its website. “For example, if an ad features an endorser who’s a relative or employee of the marketer, the ad is misleading unless the connection is made clear. The same is usually true if the endorser has been paid or given something of value to tout the product. The reason is obvious: Knowing about the connection is important information for anyone evaluating the endorsement.”

In April, the FTC sent letters to dozens of celebrities reminding them of the guidelines. “The FTC’s Endorsement Guides provide that if there is a ‘material connection’ between an endorser and an advertiser – in other words, a connection that might affect the weight or credibility that consumers give the endorsement – that connection should be clearly and conspicuously disclosed, unless it is already clear from the context of the communication. A material connection could be a business or family relationship, monetary payment, or the gift of a free product. Importantly, the Endorsement Guides apply to both marketers and endorsers.”