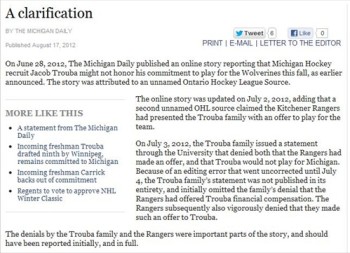 The recently added clarification reveals that the newspaper’s original June 28 story claimed that “an unnamed Ontario Hockey League source” said “Michigan Hockey recruit Jacob Trouba might not honor his commitment to play for the Wolverines this fall.”

The article has been replaced with a lengthy Aug. 17 clarification noting the newspaper’s failure to include “denials” of its report.  According to the Toronto Star, the Rangers “dropped a $1-million lawsuit against” the newspaper after the report was unpublished. But, the Star reported that the Rangers’ “lawsuit against the unnamed source remains open.”  Student Press Law Center noted that the Rangers “claim the July 3 article was false and was published “in a deliberate and malicious attempt to harm the Rangers’ reputation.” The team sought a combined $1 million in general and punitive damagers.” Student Press Law Center published a copy of the “claim.”

In mid-July, before unpublishing the report, Michigan Daily defended the story with a statement reading in part that

“The article was updated to include further developments on July 2, July 3 and July 4. The Rangers and the Trouba family have denied the offer, and the Rangers have threatened legal action. The Daily stands behind the story and the reporter, Matt Slovin. The Daily will respond to threats of legal action in an appropriate fashion.”

According to the clarification, a week after publication, “the Trouba family issued a statement through the University that denied both that the Rangers had made an offer, and that Trouba would not play for Michigan,” but it took the newspaper a day to post the statement “in its entirety.”  Also, Michigan Daily “initially omitted the family’s denial that the Rangers had offered Trouba financial compensation.”

“The Daily clarifies here that, while it was at the time reporting a story of importance to the Michigan sports community, and that its source made the claims reported in the story, if all of the facts had been known to the Daily, including the denials that were not initially reported, and the subsequent OHL investigation that found no violation, the Daily would not have published the story. The Daily has accordingly removed the story from its website.”

The Rangers issued a statement about the settlement and unpublishing writing that it was “discontinuing” its lawsuit against the newspaper, but not against the anonymous source. The Rangers wrote:

“The Kitchener Rangers remain gravely concerned about the ease with which a source hiding behind the cloak of anonymity was able to spread the false allegation that our organization offered Jacob Trouba financial compensation.

“We are not discontinuing the action against the anonymous source. Although truth would be a complete defence to the libel action, we fully expect that the source will not have the courage to step forward, as there is not a shred of truth to the allegation, as the Ontario Hockey League investigation has now confirmed.

“It is unfortunate that there are individuals so intent on harming our organization that they would fabricate and disseminate harmful lies. It is particularly unfortunate that they chose to implicate Jacob Trouba and his family, who should not have had to answer to the baseless allegation.”

We’ve written to Michigan Daily and the Rangers for more information and will update with any response.