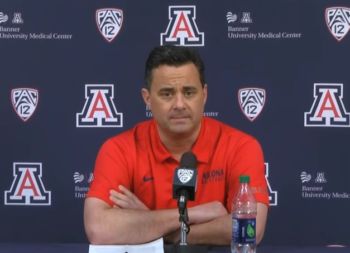 First, ESPN reported that Miller was caught on wiretap in which he “discussed paying $100,000 to ensure star freshman Deandre Ayton signed with” his team, the Wildcats, based on anonymous sources “familiar with the government’s evidence” and “with knowledge of the FBI investigation.” ESPN’s Feb. 25 headline was, “FBI wiretaps show Sean Miller discussed $100K payment to lock recruit.”

Then, ESPN issued a correction stating that the dates of the phone calls were inaccurate. On Feb. 25, ESPN posted the following correction: “In a Feb. 24 SportsCenter talkback, ESPN used the wrong year in discussing the timeline in a story about telephone conversations between Arizona coach Sean Miller and Christian Dawkins, a key figure in the FBI’s investigation into college basketball corruption. Sources told ESPN the call in question was made in 2016.”

Next, ESPN took back its correction, saying its original reporting was accurate. That came on March 1, when ESPN issued a correction of the correction, which read: “Additional reporting confirmed that ESPN was correct in a Feb. 24 SportsCenter video talk back which stated that Arizona coach Sean Miller and Christian Dawkins, a key figure in the FBI’s investigation into college basketball corruption, spoke in 2017. A correction of that report, issued Feb. 25, misstated that the conversation in question took place in 2016. ESPN stands by the reporting of the story on SportsCenter and ESPN digital media.”

On March 1, Miller held a press conference denying ESPN’s report, saying in a statement that, “I have never knowingly violated N.C.A.A. rules while serving as head coach of this great program. I have never paid a recruit, prospect or their family to come to Arizona, and I never will,” according to the New York Times.

iMediaEthics wrote to the communications team for the University of Arizona Wildcats to ask if Miller has any further comment on ESPN’s claims and the corrections, and if he or the team has complained to ESPN. A spokesperson pointed iMediaEthics to Miller’s press conference statement, in which Miller denied the claims.

iMediaEthics wrote to ESPN to ask what prompted the correction, what additional information it obtained in order to correct the correction, if Miller complained to ESPN, and for a response to Miller’s denials. ESPN spokesperson David Scott declined to comment on the editorial questions, and provided the statement that “We stand by our reporting.”