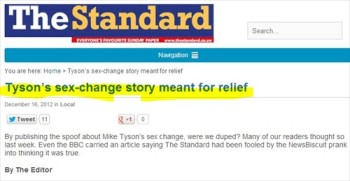 The Standard maintains that it was not hoaxed by News Biscuit's story. (Credit: the Standard, screenshot, highlight added)

Zimbabwe newspaper The Standard ran a story claiming that Mike Tyson was having a sex change.  But, after news outlets including the BBC called them out for being hoaxed, The Standard denied that it had been tricked and claimed it was in on the joke.

News Biscuit doesn’t disguise that it’s not a real news site. For instance, its logo includes the tag line “The news before it happens…” Also, its “About” page describes News Biscuit as a six-year-old site created

“with the noble aims of eradicating global poverty, creating a lasting peace in the Middle East and providing a daily dose of humour to bored people at work.”

Its satire sex change article claimed Tyson was changing his name to Michelle and that he said “his first menstrual cycle ‘would be a dream come true.'”  The bottom of the story notes it is “tagged as…parody, satire, sex change, spoof news.”

After The Standard was busted for posting the News Biscuit tale, the newspaper apparently unpublished the report.  The link to The Standard’s story, “Mike Tyson Now Female?” now goes to a dead page, but NBC Sports posted a screenshot of the article.

“But readers should have noticed that we punctuated our headline with a question mark. We followed what is called ‘Betteridge’s law of headlines’.

“The law says, ‘Any headline which ends in a question mark can be answered by the word no’. It has also been called ‘Davis’ law’ or just the ‘journalistic principle’.  …

“When we read it on NewsBiscuit, we laughed and thought our readers could also get the relief we got. They did!

“There were so many hits on our website, more than most stories in recent times.

“And who says spoofs should only be carried on April 1?”

Commenters didn’t fall for The Standard’s defense though, with many readers calling for the newspaper to admit it had been duped and give an apology.  One reader, “Nyati,” asked about the unpublishing, writing:

“if it was meant for relief why is the original story not on your website anymore?”

“Hey, swallow your pride and own up! Enough of this ego thing. You should just have rewritten the story and highlighted that it might not be true. Alternatively you should have tried to verify facts. I personally did not get any relief. Thanks.”

And, reader “Perks” turned The Standard’s question mark headline excuse back at the newspaper writing:

“The Standard Knew Tyson’s Sex Change Story Was A Spoof?

“I see what you mean”

The Standard’s editor Nevanji Madanhire re-iterated in an email to iMediaEthics that The Standard wasn’t tricked and again used the original post’s headline’s question mark as evidence.  Madanhire wrote:

“I caused the publication of the article and in doing so was fully aware that it was a spoof hence I had the headline punctuated with a question mark, a common practice in this country when the editor wishes to alert readers that a story is not  or may not be true. Every newspaper here once in a while publishes a spoof, especially on April 1 and explains to readers in the next edition, as we did. The story was on our website for the duration of the issue.”

“Our follow-up story was not an attempt at cover-up although a few of our readers thought so. We explained the Betteridge’s law of headlines, which I suppose you are aware of. Naturally some readers were skeptical and we expected that. The story was trending on Facebook and other social sites and that’s how we got it. The only comment I wish to add is that I was not duped and in publishing the article was fully aware that Tyson had not gone through a sex change. I have taken full responsibility and will be fully circumspect when publishing spoofs in future for I am fully aware that some of my readers may not be in a position to tell what is a spoof and what is not.”

“We have on average 200 000 readers a week for our print edition and about 30 000 readers on line, the number that commented is minuscule, I think less than five. We get comments, positive and negative on every story we carry and we consider that par for the course.”

Part 2 of iMediaEthics’ report on this hoax will be published tomorrow.