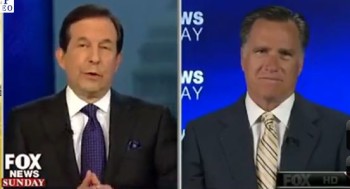 Harris-Perry and guests on her program mocked the Romney family Christmas card last week, pointing out the adopted black grandson as different from the rest of the family. Among the inappropriate jokes, Harris-Perry and her guests suggested that Kieran Romney should marry North West, the daughter of Kanye West and Kim Kardashian and sang the song “one of these things is not like the others.”

Real Clear Politics posted the dialogue between host Chris Wallace and Romney. Romney said in part that using children to critique politicians is “beyond the line, and I think they understand that, and feel that as well.”  He added that he found Harris-Perry’s apology “heartfelt.”

Here is the conversation in full as it relates to the Romney case:

MITT ROMNEY: Well, first let me just note, Chris, we love this little guy a great deal. He was an answer to prayer, and we love that he is a part of our family. He is a part of our family. That being said, I recognize that people make mistakes and the folks at MSNBC made a big mistake. They’ve apologized for it, and that’s all can you ask for. I am going to move on from that. I am sure they want to move on from it. Look, I’ve made plenty of mistakes myself and they’ve apologized for this. You know, I think we can go on from there.

ROMNEY: Well, you know, I think people recognize, and the folks at MSNBC have apologized, recognized people like me are fair targets. If you get in the political game, you can expect incoming. But children, you know, that’s beyond the line, and I think they understand that, and feel that as well. I think it’s a heartfelt apology. I think for that reason, we hold no ill will whatsoever….I think her apology was clearly heartfelt. We accept that. And with regards to the rest of the comments, I hadn’t heard those and don’t really have any comment on those.

Find video of the apology acceptance below.  Also, The Daily Mail reported that Comedian Dean Obeidallah, one of Harris-Perry’s panelists who apologized, “sought to defend himself in an article on the Daily Beast.”

He wrote, “As a comedian and writer I have been called a lot of things but up until yesterday no one had ever said I was a ‘baby bully.’