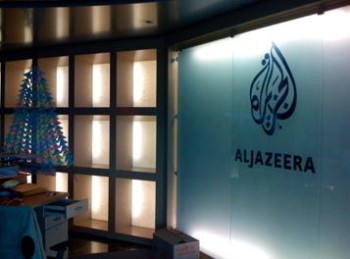 Mohamed Fahmy, one of the Al Jazeera journalists being re-tried in Egypt after having a previous conviction overturned, is suing Al Jazeera for negligence, the BBC reported.

Fahmy wants 100 million Canadian dollars for what he claims is Al Jazeera’s “negligence.”

“I am not losing sight of who put me in prison,” Fahmy said, according to the Associated Press. “However, Al-Jazeera’s epic negligence has made our situation harder, more difficult, and gave our captor more firepower.”

Despite the freedom of speech and press freedom issues, Fahmy said “a very important aspect of this case is Qatar abusing its Al-Jazeera Arabic platform in waging a media war against Egypt.”

Fahmy blamed Al Jazeera for not getting its staff the appropriate permits needed to work in Egypt and for not providing better security for staff, the Associated Press reported.

He also said Al Jazeera was “an arm of Qatar’s foreign policy” and both “biased towards” and “sponsors of the Muslim Brotherhood,” according to the Toronto Star. He said he wants to “set the record straight and put Al Jazeera on trial in Canada’s top court.”

“The conduct of Al Jazeera resulted in three professional jorrnalists being imprisoned for over 400 days,” his lawyer Joanna Gislason said.

“This is not journalism, this is propaganda and it’s dangerous,” Fahmy added. “Our time in prison is proof of that.”

Al Jazeera responded to the lawsuit saying it was “sad,” CNN reported. “It’s sad to see Fahmy and his lawyer repeating criticisms of Al Jazeera made by the Egyptian authorities,” Al Jazeera is quoted as saying. “It’s what his captors want to hear at this stage of the retrial. All governments have news outlets that they don’t like, but they don’t use spurious grounds to put journalists in jail. If Fahmy wants to seek monetary compensation from anyone, it should be from his jailers.”

Fahmy was released earlier this year from jail after spending “more than 400 days” there with Baher Mohamed and Peter Greste. His re-trial begins soon.

iMediaEthics has published a series of investigative reports on Egypt and Al Jazeera, including an exclusive interview with a former criminal lawyer for Al Jazeera, Farag Fathy Farag, who claimed Al Jazeera tried to launder money through him to pay people to stage protests.

iMediaEthics was the first to publish that Al jazeera set up staff for enforcement because staff did not have the proper licenses and Al Jazeera did not follow its then-attorney’s warnings against suing Egypt.