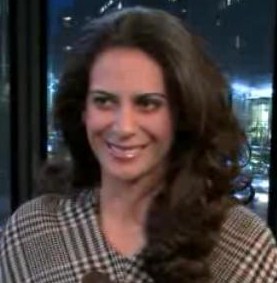 A dental practice filed and dropped a lawsuit against blogger Lyss Stern, pictured above in a screenshot from a recent video interview by WPIX, for not publishing a puff piece. (Credit: WPIX)

The dentists, Lowenberg & Lituchy, sued Stern, who also edits an advertising supplement for the New York Observer, for not publishing essentially an advertorial in lieu of paying her $45,000 cosmetic dental bill.

The dental work was completed between October and November 2009, according to the suit.

The lawsuit charged that Stern promised to pen a four-page article in last December’s Observer supplement, Observer Playground “profiling the achievements and advancements in the industry of ‘Lowenberg & Lituchy,'” The New York Daily News reported the lawsuit said.

The Daily News reported that the dentists’ lawyer, Michael Laufer of Central Park South, confirmed the lawsuit “matter is closed.”

“Laufer would not explain what spurred the sudden turn of events, but said he would submit papers Tuesday to withdraw the suit, which was filed in Manhattan Supreme Court.”

The dentists bill themselves as “cosmetic dentists who are at the forefront of the cosmetic dental revolution that gained popularity in the 1980’s and continues to flourish today” on their website.

The Society of Professional Journalists advises that journalists both “distinguish news from advertising and shun hybrids that blur the lines between the two” and “refuse gifts, favors, fees, free travel and special treatment, and shun secondary employment, political involvement, public office and service in community organizations if they compromise journalistic integrity.”

iMediaEthics wrote to Stern and the dentists’ office for comment and will update with any response.  We specifically asked Stern what her editorial roles were and if she has a journalism background, and we asked the dentists about the lawsuit.  iMediaEthics has also written to the Observer asking how much editorial control Stern has, if she wrote but never published the 4-page story, and if she will continue to work for the Observer.

See iMediaEthics reportage on problems with advertorials in journalism.