Murdoch-Owned UK Tabloid Accused of Hacking Voicemails of Murdered Girl, May Have Interfered with Investigation 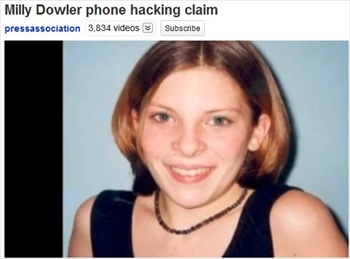 Milly Dowler, pictured above, was murdered in 2002. News of the World is accused of hacking her voicemails in the days after she first disappeared. (Credit: YouTube, "pressassociation")

News of the World is accused of hacking into the voicemails of murdered UK teenager Milly Dowler in 2002 shortly after she went missing, The Guardian reported.  The 13-year-old Dowler went missing March 21, 2002, and was found dead September 18, 2002.

According to The Guardian, police investigating hacking at News of the World have found that the newspaper’s private investigator Glenn Mulcaire “intercepted — and deleted” Dowler’s voicemails. The Dowler family’s attorney told the UK Press Association that the family’s phones may have been hacked as well.

News of the World allegedly deleted voicemails so there would be room on her system for more messages. But, because her messages were deleted and therefore her phone was being accessed by someone, her family and friends “concluded wrongly that she might still be alive” which “created false hope and extra agony.”

“As her friends and parents called and left messages imploring Milly to get in touch with them, the News of the World was listening and recording their every private word.”

Police reportedly claim that News of the World may have “destroyed” evidence in the process.

The Guardian noted that while Dowler was still missing, her family “granted an exclusive interview to the News of the World in which they talked about their hope, quite unaware that it had been falsely kindled by the newspaper’s own intervention.”

The Dowler family has called the hacking “heinous” and “despicable” and intends to sue for damages, according to The Guardian.

The family’s attorney, Mark Lewis, commented that “It is distress heaped upon tragedy to learn that the News of the World had no humanity at such a terrible time. The fact that they were prepared to act in such a heinous way that could have jeopardised the police investigation and give them false hope is despicable.”

News International issued a statement regarding the hacking that noted the company is “co-operating fully” with the police in its investigation.  Commenting specifically on the Dowler case, News International stated: “This particular case is clearly a development of great concern and we will be conducting our own inquiries. We will obviously co-operate fully with any police request on this should we be asked.”

As an example of the way News of the World used the hacked information, The Guardian cited News of the World’s April 14, 2002 story, which mentioned a message made on Dowler’s voicemail, “six days after Milly went missing.”

The Guardian noted that the man convicted and jailed in Dowler’s murder, Levi Bellfield, was also accused of trying to kidnap a girl named Rachel Cowles. But, that charge couldn’t be pursued because of “premature publicity by tabloids” that interfered with the possibility of “the jury to reach a fair verdict.”

The Telegraph noted that police have reportedly told a man named Colin Stagg his phone may have been hacked as well.  Stagg was “wrongly accused of killing Rachel Nickell.”

News of the World is owned by media mogul Rupert Murdoch.

Read more of iMediaEthics’ reports on the accusations of phone hacking at News of the World here.