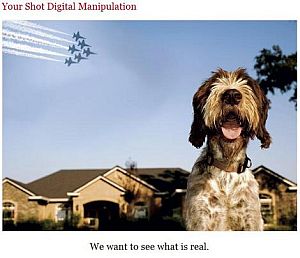 In its June 2010 issue, National Geographic published a column calling out photographer William Lascelles for submitting altered photographs to the magazine’s photo contest as if they were unaltered.  Lascelles submitted a photograph of a dog with Blue Angels jets flying in the sky behind it.

An abridged version of the column is available here. National Geographic wrote that Lascelles told the magazine’s writer and researcher that the photo was legitimate.  National Geographic also wrote that its senior photo editor, Susan Welchman, requested Lascelles submit “the next photo in his shooting sequence” to verify the photo’s legitimacy, to which Lascelles submitted a photo with the dog’s head turned.

National Geographic wrote that both were fake photos and that Lascelles has “admitted that he fabricated both images he sent us.”

Krawetz wrote that it shouldn’t have been that difficult for the magazine to realize the fauxtograph wasn’t legitimate.  Outside of being skeptical of the cloned jets, Krawetz listed a few computer tricks National Geographic could have checked out, which would have revealed the photo had been significantly altered.

“And most importantly: don’t just accept the word of a photographer; it may be significantly altered even if they claim that it is ‘100% real,'” Krawetz wrote.

“This is more than just posting a small correction,” Krawetz wrote. “This is a full outing.”

National Geographic’s reaction is welcome to Krawetz, who wrote that the magazine didn’t seem that concerned with fake photos last fall.

Krawetz wrote that last November, he wrote to National Geographic alerting it that one of its photo contest entries was an altered photo.  Krawetz posted a response from the society which said that the magazine just didn’t have the time or resources to review photos.

That response wasn’t OK with Krawetz:

“Frankly, if you are going to hold a photo contest and require original photos (not digitally altered), then you should take the time to verify every finalist. I’m not saying that you should police every submission. Rather, attempt to evaluate every finalist or semifinalist — probably a dozen or so pictures. You usually don’t even need special tools; a critical eye is usually good enough. If you don’t have the time or resources to validate potential winners, then perhaps you shouldn’t hold the contest.”

Especially compared with the response from Smithsonian magazine when he brought a similar issue to it.

Krawetz wrote that in March 2009, he wrote to Smithsonian editors and let it know that several of its annual photo contest finalists had submitted modified photos which were clearly violations of the contest rules.  Krawetz noted that Smithsonian promptly replied and disqualified the photos.