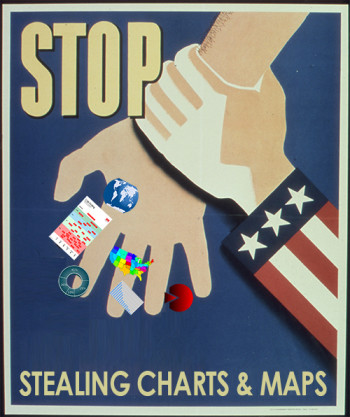 “Y’all should probably stop stealing people’s charts without proper attribution,” Silver tweeted April 13. “You do this all the time, to 538 & others.”

Yo, @voxdotcom: Y’all should probably stop stealing people’s charts without proper attribution. You do this all the time, to 538 & others.

Silver estimated that Vox “rarely” links to the original source and uses other outlets’ maps most of the time.

Only about 20% of the maps @VoxMaps tweets were actually made by Vox. Always a link to a Vox story, rarely to original source.
— Nate Silver (@NateSilver538) April 13, 2015

In later tweets, Silver wrote that Vox is “just the 109th-best referred to FiveThirtyEight. Despite citing our work quite often,” and comparing traffic from Vox to other outlets like Gawker and Huffington Post which drive “like 25-50x more” traffic.

Only about 20% of the maps @VoxMaps tweets were actually made by Vox. Always a link to a Vox story, rarely to original source.

“Our policy, to our staff, is simple: any time we use work created by someone else, we need clear attribution to the original author and a link back to the source,” he wrote. “When appropriate, we should do more than that: we should add to the conversation with new facts, ideas, or reporting.”

Klein responded to a specific article about which Silver complained — an April 13 post “Unlike Hillary Clinton, the entire GOP field is either obscure or unpopular.”

Klein admitted that post didn’t link back to Silver’s site even though it cited and re-published one of its graphics. The lack of link was “careless, not malice, but it’s a violation of Vox’s internal standards,” Klein commented. For that case, Klein apologized. There’s a link to fivethirtyeight.com now. He defended the re-publication of the graphic as necessary to the story given that “the post went on to argue with Silver’s interpretation of the data.”

Klein also addressed VoxMaps. Vox Maps is a Twitter account to “push out our coverage of graphics — both those we make and those we don’t — with links back to the original posts,” according to Klein.

Silver complained that VoxMaps links back to Vox instead of the original source of the graphic. Klein admitted that since “it’s a new experiment…maybe we haven’t gotten the mix right.” But he defended the practice of linking back to Vox since “that’s where our analysis is, and that’s where the sourcing information is.”

iMediaEthics asked Silver for comment on Vox’s Klein’s response. We haven’t heard back yet but Silver has tweeted

Golden Rule of Aggregation. If roles reversed — if you were aggregate-ee and not aggregator — would you be content with attribution?