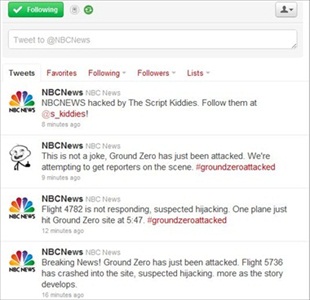 The hashtag “#groundzeroattacked” was attached to the fake tweets. In a final tweet, eight minutes after the hacking appeared to have occured, hacking group “The Script Kiddies” accepted responsibility for the hack.  Shortly after, NBC News’ Twitter account was suspended.

As the fake tweets were posted, a few journalists including NBC News’ Ryan Osborn and NBC’s chief digital officer Vivian Schiller tweeted announcements about the hacking and calling on readers to ignore the bad information.