Iconic Spanish civil war photo of a soldier being shot, may be real 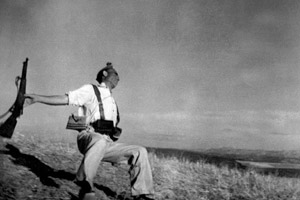 1936, "Death of a Loyalist Militiaman", Cerro Muriano. "Is also known as The Falling Soldier."

“Field Marshal Montgomery arranged for ‘action’ scenes to be filmed well behind the frontline and before the battle of El Alamein began in October 1942. Footage of the D-Day landings in 1944 was doctored using film recorded during the invasion rehearsal at Slapton Sands in Devon…”

So what about that famous Spanish civil war photo by Robert Capa ? Brooks stated:

“It is one of the most famous war photographs and also one of the most contentious. For decades many have argued that Robert Capa’s picture of a soldier being shot in the Spanish civil war was faked.”

“The elements which give it such universal meaning also make it vulnerable to fakery claims. There are few clues to the location and no one is pictured other than the falling man whose face is blurred. There is no blood and no sign of an entry wound. The photograph also raises questions as to how Capa happened to be next to him at the moment he was shot.”

Even though the negative of the famed image was never found, according to Randy Kennedy, the recent discovery of the “original sequence showing all the images taken before and after the shot, could end the debate.”