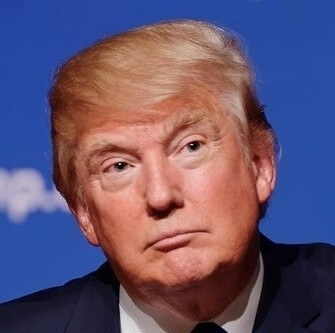 A new iMediaEthics poll of 1,000 national adults, conducted May 4-7, 2017, by Princeton Survey Research Associates International (PSRAI), reveals that only half of adult Americans know that President Donald Trump has not publicly released his tax returns. Among that group, three-quarters say he should release them, but many don’t care that he hasn’t done so.

Overall, just three in ten (29%) Americans know that Trump has not released his tax returns and are either “very” or “somewhat” upset that he hasn’t.

Less than three percent of those who know that Trump hasn’t released his tax returns say they think he should not release them and would be upset if he were required to do so.

The rest of Americans, about two-thirds, either don’t know that Trump hasn’t released his tax returns, or don’t care whether he does or is required to do so.

Despite widespread media coverage of the issue, and over a hundred marches with tens of thousands participants on tax day (April 15) calling for Trump to release his tax returns, only about half the public correctly notes that Trump has not done so.

The rest of Americans either admit they don’t know (41%) whether he has done so, think he has already done it (6%) or refuse to answer (3%).

Independents (35%) and Republicans (40%) are far less likely to know the status of Trump’s tax returns than are Democrats (64%), no doubt a reflection of the kinds of news media the different groups are probably consuming. But even among Democrats, whose party leaders have been especially active in calling for the president to release his returns, over a third are unaware.

Among the people who said Trump had not released his returns, three-quarters think he should – a figure that varies by party affiliation. 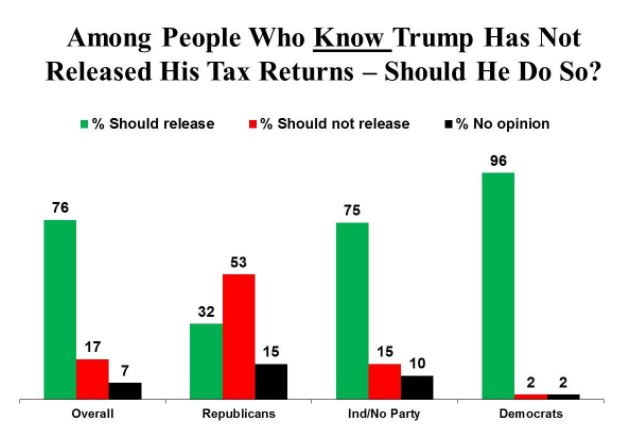 Not surprisingly, most Republicans support the president’s stance on the issue, saying he should not release them by a 53% to 32% margin.

Independents and Democrats overwhelmingly think Trump should release his returns, by margins of 75% to 15%, and 96% to 2%, respectively.

Taking Into Account Intensity of Opinion and Lack of Knowledge

Many of the people who say they want Trump to release his returns, however, do not particularly care that he hasn’t done so. As a follow-up to the “release” question, respondents were asked: “How upset are you Donald Trump has not released his tax returns for the past several years: Very upset, somewhat upset, not too upset, or not upset at all?”

About a quarter of the people who wanted Trump to release his returns then admitted that they were “not too upset” or “not upset at all” that he hadn’t done so.

The net result: Among people who know about the issue, just over half (57%) are “upset” (they “care”) that Trump has not released his returns.

When we take into account that the people who know about the issue represent just half the public, the net result is that just 29% of all Americans know that Trump has not released his returns and are upset about it. 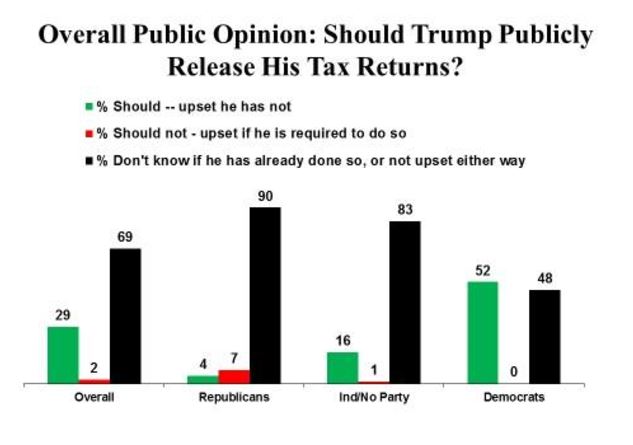 Only 4% of Republicans are upset that Trump has not released his returns, compared with 16% of independents and 52% of Democrats.

Very few Americans would be upset if Trump were “required” to release his returns – just a little more than 2% overall, compared with 7% of Republicans, 1% of independents, and virtually no Democrats.

At his press conference on Jan. 11, 2017, Donald Trump declared that no one but reporters care about his tax returns.

REPORTER: Do you believe the hacking was justified and will you release your tax returns to prove what you’re saying about no deals in Russia?

TRUMP: Well, I’m not releasing the tax returns, because as you know, they’re under audit.

REPORTER: But every president since the ’70s has —

REPORTER: You don’t think the American public is concerned about that?

Politifact rated Trump’s claim to be “false,” citing numerous polls suggesting substantial majorities of Americans want the president to release his returns. But the two sides may be talking past each other.

In part, the problem is language: What does it mean that the public “cares” about the tax returns? If we think about “caring” as an informed and intense feeling about the issue, there are a couple of problems with the polls that Politifact cites.

Problem #1: Those polls do not measure whether respondents even know if Trump has released his returns. Instead, the polls ask outright: Do you think Trump should or should not release his tax returns? That question tells respondents that Trump has not done so – and for many respondents, that is when they first know about it.

If people don’t even know that Trump has not released his returns, how can they “care” that he has not?

Problem #2: The polls cited by Politifact didn’t measure intensity of opinion. People may say they prefer Trump to release his taxes, but do they “care” that he has not?

Unlike other pollsters, in its January 2017, poll, ABC/Washington Post did ask a follow-up question among those who said Trump should release his tax returns: “How much do you care about that: A lot, or not so much?”

When looking at other polls that do not measure intensity, it’s worthwhile remembering that in this ABC/WP poll, close to half of those who expressed an opinion said they didn’t care.

Of course, it was the 74% figure that was widely cited by other news organizations. (See here, here, and here for examples.) The higher figure fits in with conventional wisdom. Nevertheless, it’s misleading to say that the figure represents the percentage of Americans who currently care that Trump has not released his returns.

It’s also important to keep in mind that the 41% figure includes all of ABC/WP’s respondents, even those who may not have known prior to the poll interview that Trump had not released his returns. If they hadn’t known about Trump’s refusal before the poll, it’s hard to conclude they really “cared” about it.

Still, even that overblown figure suggests that most Americans do not “care” about Trump’s tax returns.

When pollsters like ABC/WP tell their samples of respondents that Trump has not released his returns, the full sample can no longer be treated as representative of the larger population. Why? Because the larger population has not been universally informed about the issue.

Pollsters argue by giving respondents information, polls can then measure what the public might think if the public were fully informed on the issue.

In fact, however, the pollsters and the media don’t admit that some of their results are hypothetical – what the public might think if everyone were fully informed. Instead, they report results as though they measure what the public is thinking.

But as the iMediaEthics poll suggests, if people don’t know about the issue, it’s hard to conclude they care about it. They might care, if they ever find out. But there’s no guarantee that all Americans are going to get informed. Thus, the sample can no longer be used to generalize to what the population at large is thinking.

Also, except for the ABC/WP poll, most polls do not differentiate between top-of-mind responses and people who feel intensely about the issue – people who “care” one way or the other.

The iMediaEthics poll used the same approach for half its sample as do most other polls – telling respondents who didn’t know about Trump’s tax returns that he hadn’t released them, and then asking a forced-choice question (no explicit ‘unsure’ option provided) about the issue. The iMediaEthics poll findings for that half sample were similar to what other polls have measured (see below).

It’s important when reporting such results, however, to specifically note that the results do not represent public opinion as it is, but as it might be – and that the results are “top-of-mind” as opposed to opinions that everyone truly cares about. 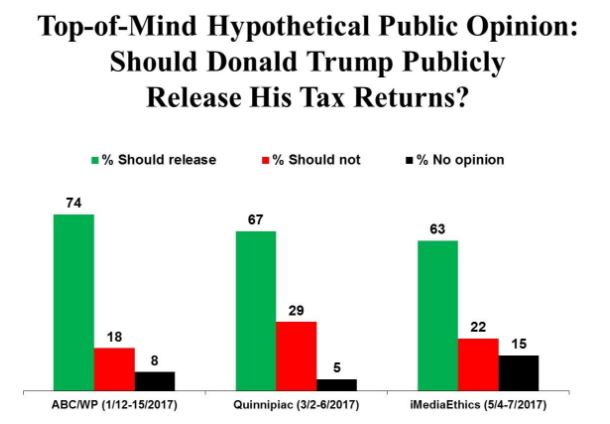 Note that the results all suggest large majorities of the American public wanting Trump to release his taxes.

While the ABC/WP poll shows a larger percentage margin for Trump to release his returns than do the other two polls, that difference could be due in part to two questions in the ABC/WP poll that preceded the “release” question. Those two prior questions asked how well Trump and his family were complying with federal ethics laws. Having just heard about the ethics problems, respondents could have been primed to be especially sensitive to ethics more generally and thus more likely to want Trump to release his taxes.

Still, ABC/WP and iMediaEthics came up with similar results based on each poll’s follow-up intensity question: 43% in the iMediaEthics poll said they “cared” (were “upset”) that Trump had not released his returns, compared with 41% in the ABC/WP poll who said they “cared a lot.”

The problem with the results in the chart is that they are not a realistic measure of opinion as it currently exists among the public at large.

A comparison of the hypothetical, top-of-mind results with a more realistic measure of existing public opinion, is shown below: 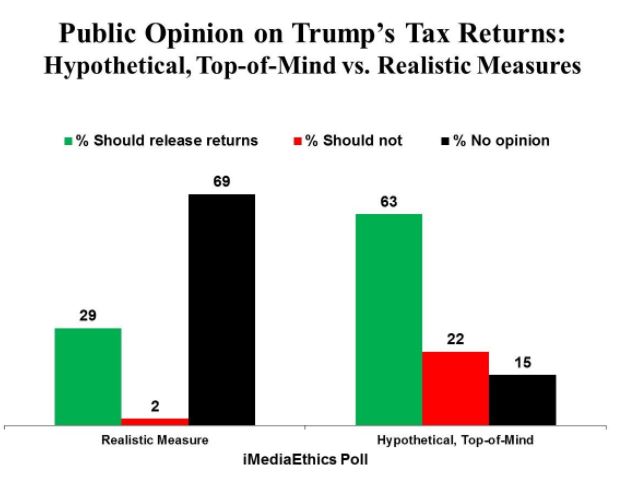 The two pictures of the public are, to put it mildly, quite different. The hypothetical, top-of-mind picture is the conventional one. It reaffirms our notions of a democratic electorate that is well informed and engaged on the issue, though such notions are not supported by objective, empirical evidence.

The realistic picture suggests how disconnected many in the public are from public policy matters.

As for Trump’s claim that only the media care about his tax returns – that is clearly not true.

But it’s also incorrect to suggest that large majorities of Americans are engaged in the issue and “care” that Trump has not released his returns.

The realistic picture: Among those who care about the issue, people want Trump to release his returns by about a ten-to-one margin. But apathetic/uninformed citizens outnumber the engaged by more than two-to-one.