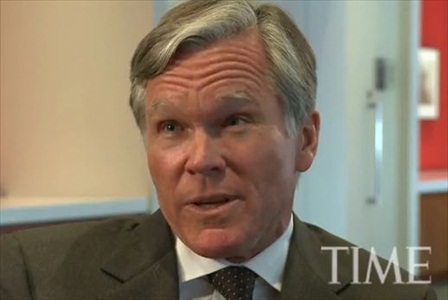 Bill Keller, pictured above in a screenshot of a YouTube video, addressed reader concerns about WikiLeaks. (Credit: YouTube, "Time")

This week’s CableGate document dump by WikiLeaks produced layers of ethical conundrums and raised questions about the relationship between WikiLeaks and the media organizations.

The collaborations between WikiLeaks and media organizations came as a result of the Guardian seeking out WikiLeaks, Columbia Journalism Review reported.

The Guardian’s Nick Davies found Assange in Brussels in June and proposed that his newspaper work with WikiLeaks on its next document dump.  Assange countered and suggested offering the opportunity to the Guardian as well as the Times and Der Spiegel.

Yahoo News reported that the Guardian shared the cables with the New York Times in order to circumvent any censorship by the British government.

“British law ‘might have stopped us through injunctions [gag orders] if we were on our own,'” Guardian investigations executive editor David Leigh reportedly told Yahoo News via e-mail. (The New York Times’ Bill Keller confirmed that the Times received the cables from the Guardian, Yahoo News reported.)

And, while CNN reported that it declined to work with WikiLeaks because it wouldn’t sign a mysterious and vague “confidentiality agreement,” it turns out that the Wall Street Journal likewise was offered, and declined, said agreement.

While the New York Times answered readers questions in a question-and-answer format here, the Guardian’s editor, Alan Rusbridger, took to the comments section.

CJR highlighted some of Rusbridger’s more noteworthy comments including that “Rusbridger said he would think about  contributing to Bradley Manning’s legal fund, given that the paper had profited off of his theft.”

The Washington Post reported – through an anonymous source – that CNN and Wall Street Journal were offered an advance look at the documents, but that the two declined because WikiLeaks wanted them to “sign confidentiality agreements that would have entitled WikiLeaks to a payment of around $100,000 if the partner broke the embargo.”  Further, “the agreement also stipulated that WikiLeaks could enforce the terms of the agreement in a court of WikiLeaks’ choosing.”

The Post’s anonymous sources are described as “people briefed on the agreement who asked not to be named because they weren’t authorized to disclose the information publicly.”

Wall Street Journal spokesperson Ashley Huston explained the decision to decline WikiLeaks as because “we didn’t want to agree to a set of pre-conditions . . . without even being given a broad understanding of what these documents contained,” the Post reported.

The Post noted it wasn’t granted the opportunity to look at the cables in advance and quoted Post editor Marcus Brauchli as saying that the Guardian declined a request to work with the Post on the cables.

The Wall Street Journal noted in this article about CableGate that it did turn down the offer to work with WikiLeaks.

New York Times on the Relationship with WikiLeaks

In The New York Times’ question and answer (see here), executive editor Bill Keller emphasized that the Times isn’t a partner with the WikiLeaks.

Assange had, in a letter exchange with U.S. State Department legal adviser Harold Koh, referred to the media outlets working with WikiLeaks as “media partners.”

iMediaEthics had e-mailed Keller asking about the “partner” comment and how the Times defined its relationship with WikiLeaks Sunday night but didn’t receive any response.  We also asked Keller if the Times signed any confidentiality agreement and if any money changed hands between the Times and WikiLeaks.

Keller explained on the Times website:   “WikiLeaks is not a ‘media partner’ of The Times. We signed no agreement of any kind, with WikiLeaks or anyone else. In fact, in this case — our third round of articles based on documents obtained by WikiLeaks — we did not receive the documents from WikiLeaks.”

Further, Keller confirmed that the Guardian did give the cables to the Times, originally under a request for anonymity.  Keller attributed Assange’s decision to not offer The Times the cables to the Times’ negative reporting on Assange and WikiLeaks.  The Times published a profile of Assange concurrently with its Iraq War Diary coverage last month, which Assange viewed as a “hit piece.”

“Julian Assange, the founder of the group, decided to withhold the material from us, apparently because he was offended by our reporting on his legal and organizational problems.”

“The London newspaper, The Guardian, gave us a copy of the archive, because they considered it a continuation of our collaboration on earlier WikiLeaks disclosures. (The Guardian initially asked us not to reveal that they were our source, but the paper’s editor said on Sunday night that he was no longer concerned about anonymity.)”

Keller defined WikiLeaks again as a source and a subject of reporting.

“WikiLeaks is a source of raw material, which we have used to write articles about America’s foreign relations,” Keller wrote. “No one from WikiLeaks had any input into our articles, or was allowed to see them before publication. Like most sources, WikiLeaks has its own motives. Our motive, in fact our reason for being, is to provide information and analysis to help readers decide what they think about the world,” Keller responded to reader questions.

Despite the Times’ past and forthcoming coverage of WikiLeaks, Keller stated that “we agree wholeheartedly that transparency is not an absolute good,” something which seems to run contrary to the beliefs of WikiLeaks.