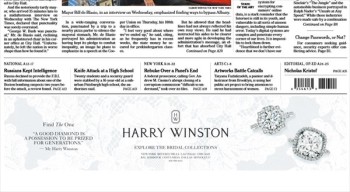 A detail of the bottom of today's front page of the New York Times.

Readers woke up thinking only a Harry Winston diamond’s ad circular was on their front steps instead of Thursday’s New York Times.

But, the ad isn’t just for any business — only Harry Winston jewels dazzled on the shiny high-end white wrapper that completely hid the issue of the New York Times.

The jeweler’s pitch on the outside of the wrap and the bottom of the Times’ front page matched. “Explore the bridal collections” was the plea.

The wrap’s large fold-over opened up. The text, which is mirrored on the bottom of the Times‘ front page, quotes Harry Winston himself, “A good diamond is a possession to be prized for generations.”

Here’s the bottom of today’s front page with a surprising large banner ad below the fold.

iMediaEthics will update shortly with a scan of the print edition’s wraparound.

iMediaEthics has written to the Times asking when the last time the newspaper sold a wrap-around ad along with a banner on the front page. We’ll update with any additional information.

Front-page ads aren’t as rare as they used to be. American Journalism Review in 2007 called them “a fading taboo.”

“Page-one ads may net premium prices, but they’re distasteful to many journalists who believe they violate the purity of page one and the sacred wall between news and business,” AJR wrote.

In mid-January 2010, Alan D. Mutter wrote on his blog, Reflections of a Newsosaur, that his review of U.S. front pages didn’t find too many front page ads. “In a survey last week of the front pages of all of the U.S. dailies published at Newseum.org, I found only 17% of the papers actually ran ads on their covers,” he wrote.

Last year, iMediaEthics wrote about a misleading online advertisement on the Times’ website. The roll-over ad for FX’s The Americans TV show included three apparently fake Russian-language news stories. And, in 2011, the Times had a roll-over ad for Coca Cola that tricked readers because it showed apparently fake news stories about polar bears in a similar style to the Times homepage.

Last year, the Chicago Tribune was criticized by readers for putting a wrap-around advertisement around a January print edition promoting the Book of Mormon.

The Los Angeles Times has also sold its  front page for advertising and done wrap-around ads for its print paper–both generating some controversy as iMediaEthics has written.

UPDATE: 4/10/2014 5:12 PM EST A New York Times spokesperson told us the “wraps were only on home delivery copies” and that the Times has published advertising wraps “many times previously.”

iMediaEthics is a subscriber to the Times and cannot recall the last time we saw a wrap ad.