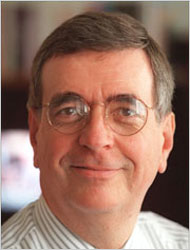 Editor & Publisher wrote – in an unsigned editorial May 19, 2003 – that the New York Times is addicted to anonymous sources. Maybe it’s true because the New York Times Public Editor Clark Hoyt can’t seem to stop writing about it.

“The Times continues to use anonymous sources for information available elsewhere on the record,” Hoyt wrote. “It allows unnamed people to provide quotes of marginal news value and to remain hidden with little real explanation of their motives, their reliability, or the reasons why they must be anonymous.”

As Firedoglake reported, this is the second time Risen has been subpoenaed for this information.

Hoyt has been public editor since May 2007. Outside of publishing numerous readers’ letters on the newspaper’s use of anonymous sources, Hoyt has written at least six columns in the past thirteen months on sourcing.

Following Hoyt’s March 28, 2009 column, Messy Matters wrote that while Hoyt noted The New York Times’ use of anonymous sources had roughly halved since 2004, Messy Matters’ count found that the Times’ use had “steadily grown” since 2000.

Messy Matters wrote that it thought the difference in statistics is from sources requesting anonymity versus “designated anonymity- in which reporters fail to name a source despite their willingness to be cited (e.g.,  abstract references to ‘expert’ opinion).”

In 2004, The New York Times announced it was tightening its standards for anonymous sources following the Jayson Blair scandal. Hoyt noted this in a June 2008 column.   He wrote the use of anonymous sources has been useful, but has also “embarrassed the newspaper.”

“Readers hate anonymous sources because they cannot judge the sources’ credibility for themselves,” Hoyt wrote.

The new standards implemented in 2004 for the use of anonymous sources are still available on The New York Times’  Web site.

Recently, StinkyJournalism wrote about Kentucky editor Mark Schaver, who developed an anonymous source tracker on his blog The Ink-Stained Wretch.  The tracker picks up almost every instance Google News notes in which a news organization uses an unnamed source starting on Feb. 10, 2010.

Although the measurements are not exactly precise, as of May 5, 2010 at 5:43 PM EST, The Ink-Stained Wretch noted 587 articles by The New York Times and its blog featuring an anonymous source.

StinkyJournalism has contacted Hoyt and will post any response.