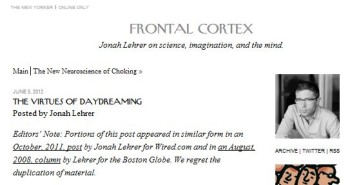 The New Yorker added an editor’s note to a June 12 article “Why Smart People are Stupid” to note that the author, Jonah Lehrer, self-plagiarized from his October 2011 Wall Street Journal column.

The editor’s note reads: “Editors’ Note: The introductory paragraphs of this post appeared in similar form in an October, 2011, column by Jonah Lehrer for the Wall Street Journal. We regret the duplication of material.”

It was the first of several to be added to Lehrer’s New Yorker work yesterday.  Self-plagiarism is “when authors reuse their own previously written work or data in a ‘new’ written product without letting the readers know that this material has appeared elsewhere,” as St. John’s University’s Dr. Miguel Roig’s paper “Avoiding plagiarism, self-plagiarism, and other questionable writing practices: A Guide to Ethical Writing,” notes.

NY Mag looked into Lehrer’s work and concluded “plagiarizes himself repeatedly,” citing previous articles for The New Yorker that lift from Lehrer’s own book and previous columns for Wired.

In an update on that post, NY Mag noted that

“Each of the five blog posts that Lehrer has written for The New Yorker now have editor’s notes attached, saying that portions of the work were previously published elsewhere: “We regret the duplication of material.”

“Writers shouldn’t recycle old material unless there’s good reason to do so, in which case it should be disclosed.”

Media Bistro’s Fishbowl NY wrote June 5 when Lehrer announced he would “no longer be a contributing editor at Wired” so he could become a New Yorker staff writer.