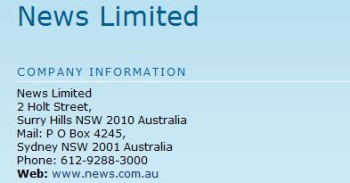 U.S. prosecutors are trying to find out about any “foreign bribery” charges for News Corp., Bloomberg reported earlier this week.

Specifically, the U.S. wants to know if the company paid “U.K police for tips.”  As Bloomberg explained, the U.S. Foreign Corrupt Practices Act (FCPA) prohibits “U.S. businesses or their employees to pay off representatives of a foreign government in an attempt to gain a commercial advantage.”

Meanwhile, the Australian arm of News Corp. is planning to “rebrand itself as News Australia,” the UK Telegraph reported.

Currently, News Corp.’s Australian arm is called News Limited. As StinkyJournalism has written, News Limited owns about 70% of the print media in Australia. The company will be renamed effective February, according to the Telegraph.