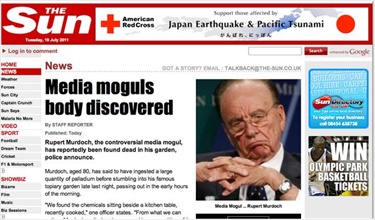 Hackers from the hacking group LulzSec broke into News Corp.-owned the Sun’s website and posted a fake story alleging Rupert Murdoch was dead as a result of a drug overdose, Tech Crunch reported.

As Tech Crunch reported, the fake story appears to evoke the news of News of the World “whistleblower” Sean Hoare, who was found dead yesterday. Hoare was fired from News of the World in relation to his alcohol and drug problems, StinkyJournalism previously wrote.

Mediaite commented on the phony story and related it to prior criticism of Murdoch-owned Fox News, which attempted to disregard the phone hacking scandal in a recent report.  A Fox News segment compared voicemail hacking by News Corp.-owned media outlets to the hacking of websites by outside groups.  In Mediaite’s report on yesterday’s hacking of the Sun, Mediaite noted: “Well, on the upside, Fox & Friends will now be able to tell the difference between phone hacking and being hacked.”

iMediaEthics wrote in June when LulzSec announced it was quitting.

The Sun was accused of hacking phones in the U.S. this past week, as iMediaEthics previously wrote. Actor Jude Law alleges the newspaper hacked his phone and his assistant’s phone when they were in the U.S. in 2003 for a 2003 Sun report.

Sean Hoare was found dead yesterday, reported the Guardian. According to the Guardian, police have stated that Hoare’s death is “not thought to be suspicious.”

In an interview last week, Hoare reportedly told the Guardian that he had “hope” that the revelation of News of the World’s hacking would “lead to journalism in general being cleaned up.”

Bloomberg noted that Hoare wouldn’t “comment to police after the New York Times report, forcing prosecutors to close the probe again because of a lack of evidence.”

Yates’s resignation came after the Metropolitan Police Authority “decided it would be right to suspend Yates pending a referral to the Independent Police Complaints Commission.”

The Wall Street Journal’s July 18 editorial on the News of the World phone hacking scandal has been much criticized.

The Journal is owned by the same company as News of the World. As iMediaEthics has previously written, News Corp.-owned media outlets have come under scrutiny for their coverage — or lack of coverage — on the scandal.

The editorial suggested that while phone hacking may be “illegal,” the responsibility for the scandal really falls on the police.

“Phone-hacking is illegal, and it is up to British authorities to enforce their laws. If Scotland Yard failed to do so adequately when the hacking was first uncovered several years ago, then that is more troubling than the hacking itself.”

The editorial went on to question why “so much moral outrage” is being focused on News Corp. “when British tabloids” have a “well-earned global reputation” for questionable ethics.

The editorial also criticized the criticisms of media and politics being too closely intertwined and suggested that both the BBC and the Guardian are “attempting to influence public affairs and .. skew their coverage to do so.”

The Guardian has heavily reported on the phone hacking scandal and significantly broke the story that News of the World had hacked the phone of murdered teen Milly Dowler. Negative reaction to that revelation seemingly led to the closure of News of the World last week.

The Wall Street Journal’s editorial also defended former Dow Jones CEO Les Hinton’s integrity and ethics, commenting that “On ethical questions, his judgment was as sound as that of any editor we’ve had.”  Hinton resigned late last week because of the scandal.  He was CEO of News International until 2007.  News International owns the Sun, News of the World and other UK publications.

The editorial also singled out ProPublica, which interviewed some former Wall Street Journal and Dow Jones owners. That interview of the Bancroft family reported that some family members “Express regrets at selling” the Wall Street Journal now that the phone hacking scandal is such a major crisis.  According to the Journal:

“The prize for righteous hindsight goes to the online publication ProPublica for recording the well-fed regrets of the Bancroft family that sold Dow Jones to News Corp. at a 67% market premium in 2007. The Bancrofts were admirable owners in many ways, but at the end of their ownership their appetite for dividends meant that little cash remained to invest in journalism. We shudder to think what the Journal would look like today without the sale to News Corp.

The editorial went on to question if a political investigation into allegations that News International bribed police officers would violate the First Amendment.

Fishbowl NY called the editorial “a joke” and “ridiculous.”

“It’s a shame that this piece ran in the Journal. There are many journalists who work there that are doing the right thing, and it’s just sad that they have to assign their names by association to this piece. It’s so delusional, that it’s like Rupert Murdoch himself wrote it,” Fishbowl NY commented.