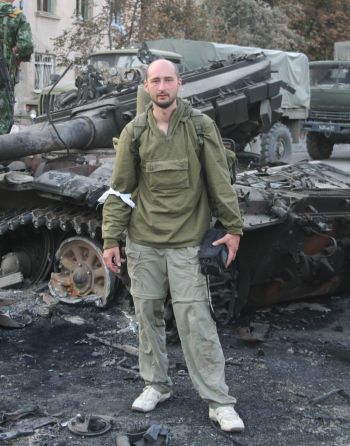 Russian journalist Arkady Babchenko faked his death, as has been reported across the globe this week. After Babchenko appeared at a May 30 press conference, many news outlets that reported on his supposed death have posted updates or corrections. iMediaEthics collects examples below:

The Associated Press released a correction:

In a story May 29 about a Russian journalist killed in Ukraine, The Associated Press and other media organizations reported, based on fabricated information from Ukrainian authorities, that Arkady Babchenko was shot and killed. Babchenko showed up at a news conference on Wednesday, saying that Ukraine’s security services faked his death to thwart a plot on his life.

[Update: On May 30, Arkady Babchenko appeared at a news conference to announce that his reported killing had been staged as part of an elaborate police operation.]

Likewise, the Guardian tacked an update on its story about Babchenko having died:

Newsweek posted an update on its story about Babchenko’s reported death which reads:

Update | Ukraine’s local press initially reported that Russian journalist Arkady Babchenko, a prominent critic of President Vladimir Putin and the Kremlin, was shot dead on Tuesday in Kiev. However, his reappearance in a press conference in Ukraine on Wednesday debunks reports of his demise.

CNN added an editor’s note to its story:

A day after Arkady Babchenko was reported to have been killed, it was revealed that his death was staged by Ukranian security services, apparently to expose a plot to kill him. A full update on this story can be read here.

The UK Telegraph posted this update:

“UPDATE, 30 May: Following publication of this article, it was revealed that Mr Babchenko had not in fact died as reported. Full details can be found here. “

A Russian journalist who was reportedly gunned down at his apartment in Ukraine’s capital on Tuesday showed up alive and well at a news conference some 24 hours later.

“I’m still alive,” Arkady Babchenko said Wednesday as he apologized to friends and family who believed he was dead. The Ukrainian Security Service said it faked his death to flush out people trying to kill him.

BuzzFeed tweeted a correction, “Arkady Babchenko was reported dead yesterday, but he is very much not.” An update at the bottom of its story about Babchenko reads:

“Arkady Babchenko is alive in Ukraine and has not been shot. A previous version of this post indicated he was dead when he is very much not.”

Correction: Arkady Babchenko was reported dead yesterday, but he is very much not.https://t.co/dbJFRxzOE3