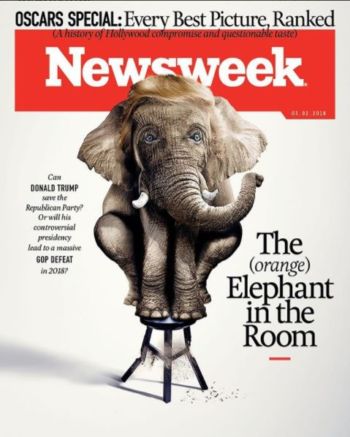 What the heck is going on at Newsweek? That question has been tossed around media circles in the past few weeks. There have been firings and the Manhattan district attorney’s investigators raided the Newsweek office. A 210-word editor’s note also raised questions about journalism ethics, anonymous sources and pre-publication review.

That editor’s note was attached to Newsweek‘s Feb. 20 story, “Why is the Manhattan DA Looking at Newsweek’s Ties to a Christian University.”  The article addressed financial ties between Newsweek’s parent company Newsweek Media Group and a “small, California-based Bible college” named Olivet University.

The article that launched the lengthy editor’s note reported that Olivet University had offered free advertising in Newsweek to a New York county where the school was considering building a campus. The Newsweek article in question also examined financial links between the university and Newsweek Media Group (formerly known as IBT Media) and how the university would have been in a position to arrange a deal between the state county and the magazine.  For example, the Newsweek article noted that Newsweek Media Group “has paid Olivet millions of dollars for licensing and research and development agreements.”

Writing about the free Newsweek advertising Olivet obtained for the county, Newsweek’s story reports: “The previously unreported arrangement provides a window into the relationship between Olivet and Newsweek Media Group, the financial ties of which the Manhattan district attorney’s office is now scrutinizing as part of a long-running fraud probe, according to sources with knowledge of the investigation.”

The editor’s note points out that during the process of working on the story, Newsweek‘s editor Bob Roe, executive editor Ken Li and one of the journalists bylined on the article, senior politics reporter Celeste Katz, were all fired; in addition, two of the reporters on the story, Josh Keefe and Josh Sal, almost got fired as well.

Newsweek Media Group asked the magazine’s editors who the anonymous sources were for the stories and that Newsweek‘s editors think that “subjects of the story were shown parts of the draft, if not the entire piece, prior to publication,” according to the editor’s note. iMediaEthics has written to the three reporters for more information, and asked Newsweek Media Group for a response to the editor’s note.

According to tweets from Josh Keefe, one of the reporters by-lined on the story, “the editors behind the note” are Michael Mishak, R.M. Schneiderman, Cristina Silva, Nancy Cooper and Dayan Candappa.

The editor’s note reads in full:

Note from the Editors:As we were reporting this story, Newsweek Media Group fired Newsweek Editor Bob Roe, Executive Editor Ken Li and Senior Politics Reporter Celeste Katz for doing their jobs. Reporters Josh Keefe and Josh Saul were targeted for firing before an editor persuaded the company to reverse its decision. As we continued working on the story, we were asked to take part in a review process which, we ultimately learned, involved egregious breaches of confidentiality and journalism ethics. We believe that subjects of the story were shown parts of the draft, if not the entire piece, prior to publication by a company executive who should not have been involved in the process. At an on-the-record interview with the subjects of this story, a company official asked editors to identify confidential sources. On-the-record sources were contacted and questioned about their discussions with Newsweek Media Group reporters. We resisted their efforts to influence the story and, after learning of the review’s ethical failings, the reporters and editors involved in this story felt they would be forced to resign. At that point, a senior Newsweek Media Group executive said the company’s owners would ensure independent review and newsroom autonomy going forward. This story was written and edited Tuesday, free of interference from company executives.