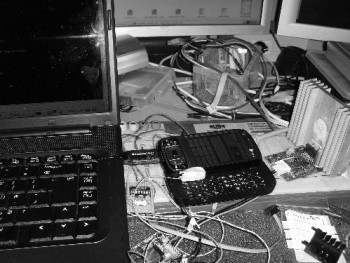 Phone being hacked to flash LEDs not to listen to voice mails. (Image altered to be black and white. Image Credit: Baz via HeadFuzz.co.uk)

Now that the phone hacking trial is over, Andy Coulson has to go to court in Scotland to deal with a perjury charge against him, the Associated Press reported.

As iMediaEthics wrote earlier this month, Coulson was convicted of phone hacking this summer and was sentenced to 18 months in prison.

Coulson was also arrested in 2012 for perjury.

He was accused of lying during a court case in Scotland about phone hacking back in 2010, as iMediaEthics wrote at the time.

Scottish politician Tommy Sheridan had previously won a libel lawsuit against the News of the World, but was also convicted of perjury after that trial. Coulson testified in Sheridan’s perjury trial and said he “had absolutely no knowledge of” Sheridan being hacked.

Coulson’s next court date is a perjury hearing August 6 in a Scottish Court, according to the Guardian.

“The hearing in Glasgow’s High Court may examine whether the perjury charge can proceed to trial, and if publicity connected the eight-month long phone hacking trial affects Coulson’s chances of receiving a fair trial in Scotland,” the Independent reported.