No criminal charges for NBC Gregory for 30-round gun magazine show n’ tell, Warned not to do it again, 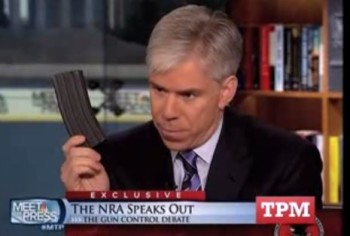 After NBC’s David Gregory showed a “30-round gun magazine” last month on Meet the Press, there was some debate and an investigation over whether he would be charged for violating D.C. law on how many rounds a magazine can have.  The magazine was empty, and used by Gregory during an interview with the NRA’s CEO Wayne LaPierre in response to the Newtown, Connecticut school shootings. Check out a video of the interview on the Washington Post’s website.

But, the Post‘s Erik Wemple reported that D.C. Attorney General Irvin B. Nathan announced Jan. 11 Gregory won’t be in legal trouble. Nathan said in a letter that his office “has determined to exercise its prosecutorial discretion to decline to bring criminal charges against Mr. Gregory” because any “prosecution would not promote public safety…nor serve the best interest of the people.”  However, the letter warned NBC against “repetition” of the action because then there would be prosecution, Wemple noted.

Further, the Atlantic Wire pointed to the office’s explaining that “influencing our judgment in this case, among other things” was related to journalism in “to promote the First Amendment purpose of informing an ongoing public debate about firearms policy.”

NBC responded to the decision, telling Wemple the action was “solely for journalistic purposes to help illustrate an important issue for our viewers.”

No criminal charges for NBC Gregory for 30-round gun magazine show n’ tell, Warned not to do it again,