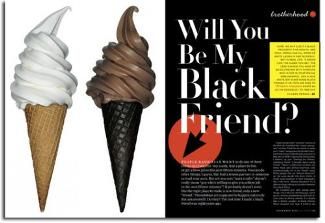 The lack of diversity in the publishing world led a GQ editor to post a Craigslist ad for a "black friend." Bryan Monroe says newsrooms, new and old, aren't much different.

Whatever gains or losses new media brings to the world of journalism–fairness, accuracy, inclusion, reach–one thing it may fail to revamp is the color of news aka media diversity.

In a November 30 Huffington Post article, “Why New Media Looks A Whole Lot Like Old Media,” Bryan Monroe, a visiting professor at Northwestern University’s Medill School of Journalism, writes that so far, “online journalism ventures haven’t figured out that to not just survive, but thrive, they must reflect a changing nation.”

Monroe says the web is “white,” and that this lack of diversity in media is a threat “to journalism for our increasingly diverse nation.”

Why does this matter? “In the age of Obama, aren’t we all supposed to be over all this?” Monroe asks, then argues that “if our newsrooms lack the broad ranges of culture, backgrounds and life experiences reflective of our society at large, how can we even hope to know what to cover and what appeals to a rapidly diversified marketplace?”

“Old school media” under huge financial pressure are reversing any of the diversity gains they may have made in recent years, as “those last hired — usually journalists of color — become the first fired in round after round of newsroom downsizing,” according to Monroe.

Meanwhile, new media isn’t doing any better, he writes. “We are starting off on the wrong foot. The U.S. Census Bureau projects that, by 2023, half of all U.S. children will be non-white. By 2042, people of color will outnumber whites in America… But in conversations about web sites and mobile, digital journalism versus soybean-ink-on-dead-trees, there has been little discussion about of the importance of capitalizing on emerging communities with broad content and diverse editorial staffs.”

He says just the opposiite is happeneing. “Look no further than the 17 staff members of AOL’s new Sphere.com. Or the single African-American reporter at Politico. Or the lack of diversity in Chicago’s new co-op journalism venture.”

Sphere.com recently touted its fresh editorial staff lineup, yet recent reports say all 17 out of 17 new writers, editors and producers are white. When the political news site Politico.com started in 2007, very few of its staff members were journalists of color. Today, only one African-American journalist, White House correspondent Nia-Malika Henderson, is on the reporting staff. In Chicago, a new public service journalism consortium, Chicago News Cooperative (CNC), was recently announced with great fanfare and $500,000 in initial funding from the John D. and Catherine T. MacArthur Foundation. Among its roster are award-winning journalists and leading minds in the Chicago media space. Problem is, its initial staff and leadership lineup announced included no blacks, Asians, Latinos, or anyone less than 40-years-old. They have taken a beating in the press for that oversight.

“If this is what ‘new media’ is supposed to be, it is looking a lot like ‘old media’ –only less diverse and more isolated,” says Monroe.  Yet he still has hope.  “I am encouraged by the energy and passions of students I run into on campus and the young minds trying to create the next big thing,” he says.

imediaethics supports the drive for a broad and representative newsforce, and shares Monroe’s hope that new media may serve to better diversify the news business and create better, more fair coverage.