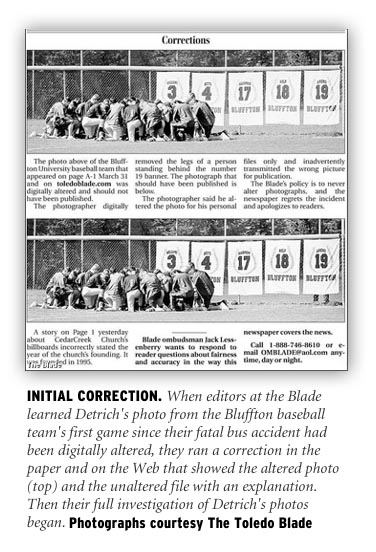 Look at the two legs under the number 19 in the lower right of the bottom photo. They were removed by the photographer before publication in the Toledo Blade (see upper image). The NPPA uses this 2007 Toledo Blade photo as an clear example of unethical digital alterations. The photographer was fired for doctoring 80 images.

The National Press Photographers Assn. (NPAA) has a specific ethics code for digital photography, titled “Digital Manipulation Code of Ethics.” The NPPA “Statement of Principle” was first approved, Nov. 1990;  later revised in July 1991; and finally incorporated into their bylaws, June 1995.

“As journalists we believe the guiding principle of our profession is accuracy; therefore, we believe it is wrong to alter the content of a photograph in any way that deceives the public.

“As photojournalists, we have the responsibility to document society and to preserve its images as a matter of historical record. It is clear that the emerging electronic technologies provide new challenges to the integrity of photographic images … in light of this, we the National Press Photographers Association, reaffirm the basis of our ethics: Accurate representation is the benchmark of our profession. We believe photojournalistic guidelines for fair and accurate reporting should be the criteria for judging what may be done electronically to a photograph. Altering the editorial content … is a breach of the ethical standards recognized by the NPPA.” (Ellipses original).

In April 2007, as reported by Donald Winslow on the NPPA site, the Blade “staff photographer Allan Detrich, a one-time Pulitzer Prize finalist and four-time Ohio News Photographer of the Year, is apparently a serial digital manipulator of news photographs. Prior to his resignation on April 7, Detrich had submitted for publication nearly 80 doctored images in only 14 weeks.” The Blade says Winslow was the first to alert them about Detrich’s photo tampering.

Stinkyjournalism published only one among the 80 doctored images. Detrich added a basketball to a play that was not, in realty, visible. In many other cases, Detrich removed distracting elements, such inconvenient objects in the background as shown in the image above. See large version of comparison