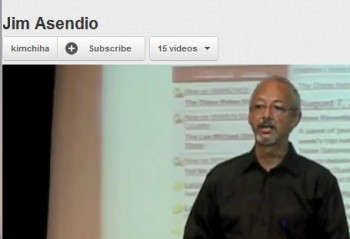 Asendio said he “did not agree with an upper management decision to have working journalists attend a donor-only, station-sponsored event” and that he does “not believe that reporters should be exposed to the real or perceived influence of individuals or foundations who fund the work of the newsroom.”

According to the the Maynard Institute’s Richard Prince, Asendio said “when he voiced his objections to General Manager Caryn Mathes, she wrote back in an email, ‘Understand that your refusal to participate in a major station event involves a permanent, irreversible statement to me, about whether you are part of my team.'”

Following that, he decided to resign, according to the Washington Post’s Erik Wemple.

The Maynard Institute noted that WAMU’s marketing and communications director Kay Summers said the station wouldn’t comment on Asendio’s resignation because it pertains to “personnel matters” and was a “personal decision.”

The Washington Post’s Erik Wemple argued that if the resignation was a “personal decision,” it “dismisses the notion that the station and Asendio had a dispute of any consequence about how the place was administered.”

“The context was to give donor constituents an understanding of how the work is performed. Approximately nine of our reporters and producers spoke on a panel discussion moderated by program director Mark McDonald. They discussed how their work comes together, and entertained general questions from the audience, like ‘how do journalists in the nation’s capital decide what is a local or a national story?’

“Allowing people to see the impact that their investment makes in our work is completely appropriate. However, the station does not permit crossing the line between a funder seeing that impact and a funder being allowed input into the planning process for coverage.”

WAMU Communications Manager Benae Mosby told iMediaEthics by e-mail that “The Meet the Producers breakfast was the first of its kind; however, we hope to build on the success of last week’s event and offer donors an opportunity to see the impact of their investment through similar events featuring content producers on a quarterly basis.”