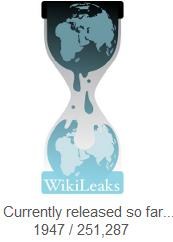 See above, a screenshot detail from WikiLeaks' Cablegate site. The site has uploaded fewer than 2,000 of the diplomatic cable leak, so news organizations have erred by referring to "thousands" of leaked cables. (Credit: WikiLeaks)

NPR issued a correction over its claim that WikiLeaks’ Cablegate leak has published “thousands” of diplomatic cables.  “Since the cables first became public on Nov. 28, NPR had repeatedly referred to ‘thousands’ of confidential State Department cables,” Shepard explained.

But, the number of WikiLeaks cables published is closer to 2,000, Shepard noted.  As of Dec. 30 at 9 PM EST, iMediaEthics noted WikiLeaks’ Cablegate site stated that the site had published 1,947 of 251,287 documents.

Shepard noted that one NPR listener’s complaints led to the correction. The listener, Henry Norr, “frequently complains about NPR’s news coverage,” including this NPR story in mid-December,” according to Shepard.

“Do you guys just make stuff up and present it as fact?” Norr reportedly wrote to Shepard via email.

“You begin your ‘review’ of this story by saying  ‘First, the website released thousands of confidential U.S. documents.’ That’s simply not true. All you have to do is go to the website in question and you’ll see that it has thus far released precisely 1,344 of the documents in question – less than one percent of the 251,287 apparently in their possession. 1,344 is not ‘thousands’!”

The editor of that story defended the use of “thousands” as Wikileaks has published thousands of documents via its Afghan and Iraq war diaries, Shepard reported.  But, Norr followed up, showing Shepard “9 examples where NPR reporters, hosts and newscasters talked about “thousands” of State Department cables being released.”

And Norr continued to remind Shepard of the error and asking for a correction, she reported.

“In recent weeks, NPR hosts, reporters and guests have incorrectly said or implied that WikiLeaks recently has disclosed or released roughly 250,000 U.S. diplomatic cables. Although the website has vowed to publish “251,287 leaked United States embassy cables,” as of Dec. 28, 2010, only 1,942 of the cables had been released.”

However, Shepard noted that NPR wasn’t the only media outlet to make the error. “It’s just plain sloppy and embarrassing to the profession to have so many reputable news organizations getting the numbers wrong,” Shepard commented.

Schafer commented on the NPR correction, claiming it “highlights a pervasive misconception propagated (likely unwittingly or perhaps just out of sheer laziness) by news media around the world.”

iMediaEthics recently wrote when Shepard called for NPR to add a “Report an Error” button to its site, which reportedly would make it easier for readers to notify editors of a problem with a story.