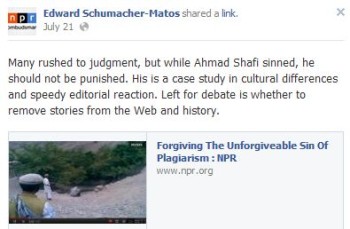 As we wrote, NPR unpublished and replaced Shafi’s July 9 article after learning that “portions of the piece” were from a 2001 book by Jason Burke.  At the time, NPR’s Anna Christopher noted that Shafi was “completely upfront and honest, and deeply contrite” about the plagiarism, and that “English is not Shafi’s first language.” Burke, whose work was plagiarized, told us that “The incident sounds like a serious error of judgement more than anything else. Frankly I’m surprised – and rather pleased –  that anyone is still reading 11-year-old reports of mine.”

Outside of that editor’s note, Schumacher-Matos detailed in his recent column that once alerted to Shafi’s plagiarism, NPR editors began reviewing the situation and contacted Shafi, who “immediately responded matter-of-factly to [NPR website foreign editor Greg] Myre that he copied the lines.”   Schumacher-Matos tallied that “only 68” of Shafi’s “766 words” aren’t Shafi’s.

Schumacher-Matos explained that while NPR views plagiarism as “unforgivable,” Shafi wasn’t aware of “American journalism ethics.” Further, Schumacher-Matos identified the issue was a “cultural gap,” adding that “The rule is right, but the journalist first has to know the rule, and Shafi didn’t.”

Shafi, who was at the execution that was the subject of his article and Burke’s writing, told Schumacher-Matos:

“English is not my first language, and I got stuck looking for the right words about a Taliban public execution I had witnessed. I did not know that using the same descriptive language from another article is a major sin in journalism.”

Schumacher-Matos noted that NPR verified Shafi was there, and that since Shafi owned up to his actions and NPR fell on the sword for not making sure “he had the basics,” NPR was lenient with Shafi, who is back “to writing, producing and recording.”

Schumacher-Matos also highlighted that NPR quickly investigated the situation, and that NPR’s decision to remove the story and replace it with an editor’s note prompts “an unresolved question of whether removing a story is the right thing to do, ever.”

We are writing to Schumacher-Matos for more information and will update with any response.