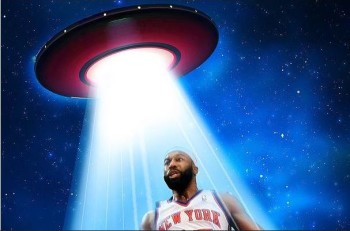 A screenshot of a photo illustration from the online version of the NY Daily News story. (Credit: NYDN, screenshot)

The New York Daily News has been taking steps to position itself as a national newspaper lately.  So why did July 13’s front page look like it belonged on a supermarket tabloid?

The paper’s front page story screamed: “I was abducted by aliens!” The story described former NBA Knicks player Baron Davis’s claims from an interview with “The Champs Podcast” that he was “abducted by aliens” this summer.  The online version of the Daily News article noted — after the print edition was published — that Davis tweeted that his claims were a “joke.”

The next day, The Daily News published a story in its print edition about Davis’ abduction claims being not serious, but the News didn’t acknowledge that the abduction claims were its front page feature the day before.

iMediaEthics is disappointed by the Daily News, which is listed by Mondo Times as having the fifth-largest circulation for U.S. newspapers, stooping to phony alien coverage to sell copies.

iMediaEthics has reached out to the Daily News seeking comment and will update with any response.

Whoops. Looks like the New York Daily News fell for Davis’ claims hook, line and sinker. Even though the online version of the article reported that Davis said he was kidding about being abducted, the print version of the Daily News article contained little, if any, skepticism.  The online story reads in part:

“The UCLA standout and two-time NBA All-Star — who tore ligaments in his knee while playing for the Knicks against the Miami Heat in the 2012 playoffs — is also a first-class practical joker. He tweeted late Friday night: ‘that alien thing is a joke.'”

The print version doesn’t mention his tweet and instead, suggested he was pushing his story as fact. The News also put into the online version, a quote from “one of the radio hosts,” saying “We don’t know if you’re being serious or not.’”

Like the online version, the print story also states that he is a practical joker. But, the print version adds to convey that the alien abduction story is real to Davis, “But this was no laughing matter, he [Davis] claimed.”

The next day, July 14, The Daily News stepped back its alien claims with a Page 3 story in its print version, “Aliens did not really snatch me.” iMediaEthics scanned July 14’s Page 3 print story — check it out.

The story reported that Davis was just kidding around when he said he was abducted.

On July 14, the Daily News reported on page 3 that Davis was just joking about being abducted. But, the News didn’t acknowledge that its front page story the day before was all about Davis’ abduction.