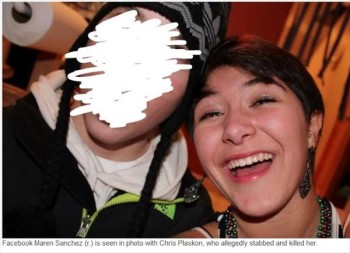 IT IS THE WRONG BOY: New York Daily News IDed the wrong student as the killer of the 16 year old Connecticut girl . iMediaEthics blocked out his face. See the original photo caption that wrongly identified him.(Credit: NYDN)

Speeding to be first, The New York Daily News made a giant, damaging error today by wrongly IDing a teenager in today’s fatal stabbing of a 16-year-old girl in Connecticut.

Maren Sanchez was stabbed to death, reportedly by another student by a stairwell of her high school. News outlets are saying she was stabbed because she didn’t want to go to prom with him, but as CBS News reports, “police have not confirmed that information.”

In their rush to publish, the Daily News appears to have pulled photos from the victim’s Facebook page without verification. One picture among the photos published by the News showed Sanchez with a young man they named as Chris Plaskon.

The News reported that Plaskon, supposedly depicted in the photo, was Sanchez’s killer.

The name of the alleged attacker and the reason for the attack are all unconfirmed by the police and only attributed to anonymous sources.

Just as fast as they made the error this morning with the bum ID of the killer, the Daily News scrambled to add a correction to the top of its article where the News admits its photo was not of Plaskon and the person pictured was unrelated to the stabbing. The correction states:

“CORRECTION:  An earlier version of this article contained a photograph of a person incorrectly identified as Chris Plaskon.  In fact, the person in the photograph was not Plaskon and had nothing to do with any of the matters discussed in the story. The Daily News regrets the error.”

The photos used by the News were credited to Facebook. The correction has been placed prominently in bold at the top of the article.

While the Daily News report and other news coverage claimed the attack was related to prom, the local police have not confirmed the reason for the attack.

“Whether or not that’s rumor, or whether or not that’s fact, we don’t know. So I think it’s important that no one — speculate on these rumors. Those are things we’re looking into. Our investigators are conducting a large number of interviews and looking at other measures as well to determine not just why this happened, but how it happened.”

iMediaEthics has written to the Daily News‘ Joe Kemp, who wrote the article for more information about the correction. We’ve also reached out to the police for more details.
UPDATE: April 26, 2014, 12:13pm EST : The New York Times posted a few minutes ago that the alleged teen killer is still unnamed by police. His lawyer, Richard Meehan, told the Times his client is now “being held in a medical facility under psychiatric evaluation.” Meehan explained “his client, who is 16, could be held there for up to 15 days. After that, Mr. Meehan said, he will probably be charged as an adult.” Once charged an adult his name would be released. The Times also reported “friends of the suspect have identified him as Chris Plaskon.” 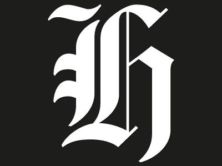