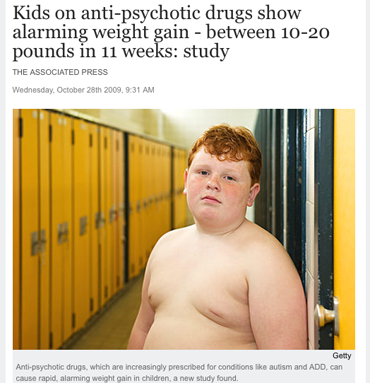 The New York Daily News uses this stock photo of a shirtless boy (with no known mental disorders) to illustrate a story about children gaining weight on anti-psychotic drugs.

First the New York Daily News used a photograph of trash at the Bronx’s Hunts Point Market to illustrate a Florida woman’s death.  Now an unidentified redhead has become their poster-boy for an article about overweight, psychotic children.

The boy in this Getty image stock photo is identified on the Getty website only as “Boy in pool locker room.” Unable to contact the boy himself, a parent, or the photographer, iMediaEthics can conclude only that the boy’s mental health status is unknown. The Daily News, however, doesn’t even mention in their photo caption that the image is a stock photo, and not of a boy known to be psychotic.

Is this the most accurate photograph to go alongside a story about new research showing kids on antipsychotic medication can suffer rapid weight gain? Not really. A photograph of a generic pill or pill bottle (like the one used here) may have served just as well as a photograph of a generic overweight kid to illustrate the news of this study published in the Journal of the American Medical Association.

It’s not illegal for the Daily News to use a bought and paid for stock photograph however they see fit. (The price list for this ruddy-cheeked swimmer ranges from $49 to $569.) But implicating this potentially normal child in a story about bipolar and schizophrenic youth raises some red flags.

Unfortunately, spur-of-the-moment photography subjects, professional child models, and people videotaped in anything from news broadcasts to documentaries usually sign away (or have their parents sign away) an impressive list of their rights.  A typical release form usually says that the signer agrees to relinquish all rights whatsoever to their likeness and recorded voice or action in perpetuity for whatever purpose the photographer or recorder dreams up.

This kid could have been originally photographed for any number of reasons, with little thought that his face and torso would be emblazoned above a headline about psychosis and weight-gain.

It is hard to look at the photograph and not associate this boy with the subject of the news piece. “Children on widely used psychiatric drugs can quickly gain an alarming amount of weight,” the article reads. “Many pack on nearly 20 pounds and become obese within just 11 weeks, a study found.”  Other articles on the study have used photographs of children. (See here, here and here.) But these mercifully cut out the subjects’ faces.

Of course, having modeled for this photograph, and presumably understanding the consequences, it is entirely possible the boy and his family would feel fine about the Daily News’ use.

But at the very least, the paper could have helped its readers understand the real nature of the image and done the very simple task of captioning the photo accurately: admitting that the picture was of a child whose mental status is undetermined and who was not associated with the study in question or representing obese children everywhere.