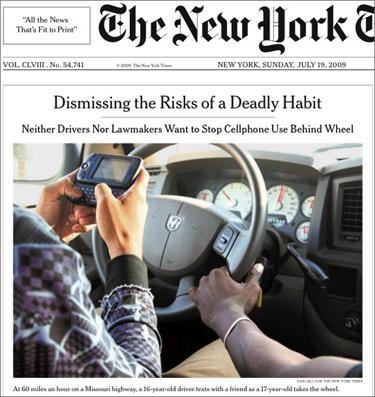 Photo District News asks The NY Times about the circumstances of their photo published Sunday showing teens driving dangerously. The Times caption: "At 60 miles per hour on a Missouri highway, a 16-year-old-driver texts with a friend as a seventeen-year-old takes the wheel."

“Were we safe? Probably not…. As journalists, we are not here to judge or to direct, but only to observe and tell the story,” said New York Times photographer, Dan Gill to Photo District News.

Was Gill speaking about Iraq? No. He was in a car shooting pictures of teenagers who were driving dangerously. But don’t worry he says he had permission to photograph the teens from the parents and did not name the teens. Are we to believe that having a New York Times photographer in their back seat wasn’t exciting or even encouraging of acting up behavior by a group of teen boys?

PDNPulse reports, “Last year, Gill was assigned a story for the Times that involved shadowing a group of high school students. This photograph is from that body of work, but it was not published until now. The scene was not set up.” Gill explained:

” ‘ In the course of doing the story in which I was hanging out with or shadowing three high school students I made the picture. I met them at their high school after classes and spent the evening with them. I told them I would be with them but to forget I was there. It did not take them long for them to forget I was there. We rode from school to one of their houses and down an inter belt highway. The driver was constantly texting ‘his girls’ throughout our travels. At one point on the eight-lane inter belt either the driver suggested his friend hold the wheel or his friend suggested it…and they did it.’ ”

In Gill’s mind, since the teens seem to be doing this all the time, he did not feel the need to stop or advise against the dangerous behavior. He told PDN, “It’s not really up to the photographer to be the parent.” But is this really a matter of parenting or more common sense, legality and civic duty?

The Times Public Editor, Clark Hoyt responded to numerous readers who asked this very question. He writes,”I think he [Gill] acted responsibly in a situation that can often present itself: Are you a journalist who only observes or a citizen who is obligated to take action?” If there had been a car wreck with injuries or death resulting from the above “photo shot,” would Hoyt still provide readers with the same answer?

Hoyt writes, the teen texting photo “was a dramatic illustration…of dangerous behavior The Times was trying to highlight and warn against.” If they were really interested in educating and warning the public, perhaps they should have started in the car, by warning the teens.

A photo of the teens being counseled to stop texting while driving may not be dramatic, but it would have truly illustrated what Times says it wants to “warn against.”