Woman didn’t have Foot Amputated so she could wear high heels, NYPost wrong, she says 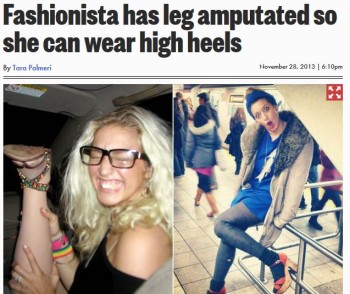 A screenshot of the NYPost article. (Credit: NYPost, screenshot)

Mariah Serrano, a Long Island resident, called out the New York Post for sensationalizing and lying about the reason for her decision to have her leg amputated, New York City blog Gothamist reported.

The New York Post’s Nov. 28 article about Serrano, 21, was titled “Fashionista has leg amputated so she can wear high heels.” The first sentence reads:

“A brave Long Island fashionista who was born with a club foot but dreamed of wearing “gorgeous high heels” did the unimaginable — she had her leg amputated so she could teeter around in stilettos.”

A photo caption accompanying the article reads: “Mariah Serrano was born with a club foot. She chose to have her leg amputated so she could wear high heels for the first time.”

The article includes numerous quotes from Serrano about her inability to wear high heels growing up, and how the surgery changed her life. Besides the claims that Serrano’s surgery was just for trendy shoes, the Post reported that Serrano blogs about “pulling off stylish looks with a prosthetic leg” and that “her brother Mason started a charity called the Octopus Project that raises money for prosthetic research.”

The New York Post’s claims have been repeated by the Daily Mail, and the UK Metro.

In a recent blogpost, Serrano took the Post to task for its portrayal of her decision. Outside of getting her age wrong (“I am 21, not 22,” she wrote), she slammed the Post for sensationalizing her amputation.

“I did not choose to cut my leg off so I can wear high heels, I had my leg amputated because I was very sick and the quality of my health and life were suffering,” she blogged. “Doctors do not welcome the idea that you are unhappy with your footwear choices, so you should remove body parts.”

She added that the amputation “was a real decision that I took very seriously.”

Gothamist, which highlighted Serrano’s complaints, explained further. “The surgery ended up being the right answer, allowing Serrano to walk without pain and live her life as normally as possible,” Gothamist wrote.

The blog went on, “As a bonus, Serrano, who spent most of her childhood and teen years in sneakers, was able to wear heels.” Gothamist further quoted Serrano as saying, “It was really exciting to wear awesome shoes. It was this perk for something that seemed like something bad happening to me.”

iMediaEthics is writing to Serrano to see if she sought a correction from the New York Post. We’ll update with any response.

UPDATE: 12/2/2013 11:01 AM EST:  Check out the print version of the article below. iMediaEthics has also reached out to the Post reporter asking for a response to Serrano’s criticism and if Serrano has requested a correction.

Woman didn’t have Foot Amputated so she could wear high heels, NYPost wrong, she says