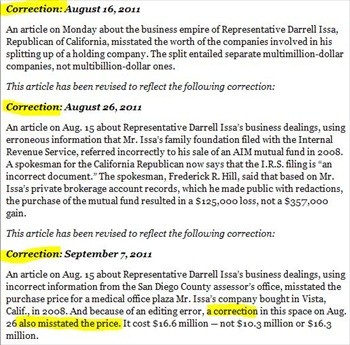 The NYTimes has made four total corrections (one correction corrected a correction) on its Aug. 15 report on Darrell Issa. Issa is calling for a full retraction.

The two Aug. 26 corrections both attribute the mistake to outside information as opposed to the Times’ or its reporter’s error.

The first correction puts the blame on Issa’s foundation, stating that the error was a result of “erroneous information  that Mr. Issa’s family foundation filed with the Internal Revenue Service.”

The other error is explained as a result of ” incorrect information from the San Diego County assessor’s office.”

The third correction stated the assessor’s office provided “incorrect information” about “the purchase price for a medical office plaza…because the assessor mistakenly omitted in public records a $6 million loan Mr. Issa’s company assumed in the acquisition.”

The Washington Post’s Erik Wemple detailed the timeline of the “smackdown between” Issa and the newspaper.  Wemple noted that the Times sent an Aug. 25 letter to Issa criticizing Issa, to which Issa reiterated on Aug. 26 his call for a retraction.

The Times’ Aug 25 letter from Dean Baquet to Issa’s office is published here on POLITICO’s website. Baquet copied public editor Arthur Brisbane on the letter and defended the Times report as “carefully reported, written, and edited.”

Baquet denied the call for a retraction and noted that Issa’ office didn’t “respond to, or even acknowledge three weeks’ worth or requests for comment.”  Baquet argued that some of Issa’s complaints could have been avoided if he had complied with an interview.

Baquet also responded in detail to three of Issa’s “central claims” and rejected calls for corrections to “peripheral points.”

In closing, Baquet commented that “I’d like to say that it is troubling to see your office using the letterhead and imprimateur of a powerful congressional committee to wage personal and meritless attacks on a reporter and a news organization.”

Issa’s communications director Frederick Hill responded Aug. 26 and called the three total corrections so far “steps in the right direction.” The letter went on to call the article “deeply flawed” and claimed that “the factual pillars of the article are incorrect.”

The letter also alleged that Lichtblau has a “negative view and bias against Rep. Issa” and that he tried to “smear him.”