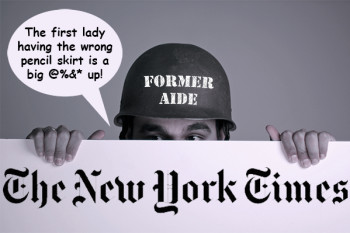 New York Times public editor Margaret Sullivan filed her second installment of AnonyWatch, her new way to track the misuse of anonymous sources in the newspaper.

As iMediaEthics previously wrote, Sullivan decided to start using AnonyWatch in mid-March as a feature to actively watchdog the Times use of anonymity.

In her March 28 post, she collected five noteworthy examples of anonymous sources in the Times. The list included a “Democratic lawmaker” anonymously criticizing Obama, and an anonymous person saying the New York Observer’s paper stock was expensive.

Sullivan also highlighted a case of “valid and probably necessary” anonymity given to a report on “efforts by militants from Al Qaeda to find a base in Syria.”

On the other end of the spectrum, she pointed to a particularly questionable use of anonymous sourcing, a Times article citing an anonymous source’s comments to another publication, criticizing Michelle Obama’s choice of skirts. To his credit, Times Styles editor Stuart Emmrich agreed with Sullivan that the newspaper should not have used the quote.

“Even in a light piece like this (and perhaps, more important, because it was a light piece), there is no reason to rely on an anonymous quote from another publication, especially one so sharply critical of the person being written about,” he wrote to Sullivan.