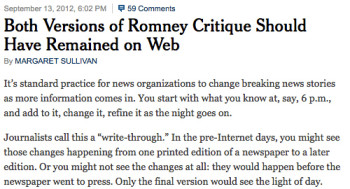 NYT public editor Margaret Sullivan blogged about a story on Mitt Romney that was changed over time. (Credit: NYT, screenshot)

The New York Times “replaced” an article on Mitt Romney with a “very different” report on Romney mid-September.

The original article, “Behind Romney’s Decision to Attack Obama on Libya,” included a “critical quote from a Romney senior adviser.”  But the new article, which had a different byline and headline, “A Challenger’s Criticism Is Furiously Returned” “replaced” the article at the “same url,” and cut some quotes Talking Points Memo reported.

Times public editor Margaret Sullivan weighed in on the changing story, acknowledging that “it’s standard practice” for online articles “to change,” but that the Times should have kept both articles in this case based on “the number of changes — and the content of those charges.”

As Sullivan summarized of the changes between stories:

“The key quotes dropped off altogether, as did almost all the original wording of the story. It was, therefore, a very different story, though its overall thrust was the same: criticism of Romney’s clumsiness and bad timing.”

Sullivan quoted Times‘ Washington bureau chief David Leonhardt as denying that the article was “scrubbed” whereas he said this article was just a “moving story.” However, Leonhardt did note that there is a “completly legitimate argument” for the Times to have kept both stories.

“In this case, the stories were very different in wording, if not in intent, and the quotes from Romney advisers were striking ones to remove altogether.  It’s clear to me that these two versions should have been treated was different stories and that both should have remained accessible on the Web site.”

Sullivan also pointed to News Diff’s preservation of the original report.  As we wrote earlier this summer, the NewsDiffs website, a project from June’s “Knight Mozilla MIT hackathon,” “archives changes in articles after publication” for the New York Times, CNN, Politico and the BBC.  iMediaEthics wrote to News Diffs asking if it had plans to expand outside of the four news outlets.  Jennifer 8. Lee told iMediaEthics by email that News Diffs is “part of the Mojo project of the African News Challenge” and “it’s being extended to Africa.”  Lee added that “Germany, Argentina, and India had added their own parsers” and that News Diffs is “an open source project, so people can take the code and run it themselves.”

iMediaEthics wrote earlier this month when the Times  took out a direct quote that could identify a rape victim.  While Times public editor Sullivan highlighted the changes to the article, Times spokesperson Danielle Rhoades Ha said there wouldn’t be a note disclosing the change since it was an “editing change.”