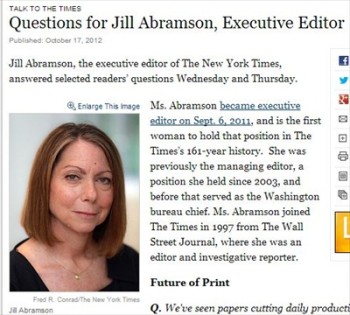 New York Times executive editor Jill Abramson commented on the Times’ standards, policies and thoughts on sourcing, online comments, reporting on Libya and more in a recent Q & A with readers.

In response to reader Charlene Flick asking about credibility, “accuracy and truthfulness,” Abramson said that the newspaper does “not hesitate to hit the brakes when there is any uncertainty about the reliability of information we report or lack of sound sourcing.”

Separately, Abramson responded to a reader identified only as Anne who asked about the newspaper’s anonymous source policy.   Abramson is quoted as saying that “The main thrust of our strategy is that the use of unidentified sources is reserved for situations in which the newspaper could not otherwise print information it considers reliable and newsworthy.”  She added that the Times tries to “give as much information as possible about the motivation or possible bias of sources as well as an explanation of why they are a credible source,” and “at least one editor should know the identity of an unidentified source.”

iMediaEthics notes that The New York Times’ Confidential News Sources Policy dictates that if sources aren’t named, reporters need to include “why we consider them authoritative, why they are speaking to us and why they have demanded confidentiality.” Further, anonymous sources can’t be used if they are giving “speculation, unless the very act of speculating is newsworthy,” or if they are giving a “trivial comment.”  And sources “must have direct knowledge of the information they are giving us.”

Times’ guidelines also advise on who at the newspaper must know the identity of the source besides the reporter and instruct that the Times’ “standards editor, while not necessarily entitled to know the identity of a confidential source, is responsible for spot-checking compliance with our procedures.”

“Anonymous sources can be misguided, wrong or even lie to reporters.”

That Q & A was in light of a column by then-public editor Clark Hoyt about anonymous sources and a study he had Columbia University Graduate School of Journalism students conduct.

In response to a handful of questions about the Times’ reporting on Libya and the Sept. 11, 2012 attack on the U.S. consulate in Benghazi that killed U.S. Ambassador Christopher Stevens and others, Abramson defended the Times’ reporting as “quite aggressive” and “dangerous, difficult reporting.”

Abramson defended again the newspaper not putting reports on the Libya hearings on the front page.  As iMediaEthics wrote previously, Times public editor Margaret Sullivan called for the newspaper to have “aggressive reporting” on Libya and questioned why, given what she viewed as “significant news value,” the newspaper didn’t feature the hearing on the attack on the front page.  (Washington Post public editor Patrick Pexton also called for thorough, deep reporting on the Libya attack, as we noted.)

Noting that Sullivan disagreed, Abramson said that because the Times “concluded there was little new information in the hearings,” it didn’t warrant front-page print status but it “dominated the Web site throughout the day.”

“We show restraint with pictures that show graphic images involving people or soldiers whose families may not be aware of what has happened to them. We certainly have published photographs that are graphic when they convey important news value. We never feature graphic images gratuitously, and we certainly don’t censor pictures to avoid conveying the news. We do convey the realities of war, sometimes at great risk to our photographers, who have faced daily threats in order to do their amazing work and have suffered grave injuries.”

iMediaEthics has written numerous times about graphic photos in the media, including the New York Times’ and other outlets’ decisions to publish a photo of the dead ambassador Stevens after the attack in Libya.  In that case, the Times argued the photo was newsworthy and that Stevens was, according to the caption, “unconscious.”  iMediaEthics wrote in August about the Times and the New York Post’s publishing graphic photos of an Aug. 24 shooting at the Empire State Building that showed the shooter and victim dead.

Readers also questioned the Times‘ commenting system.  Abramson noted that the newspaper moderates comments and doesn’t “open every article to comments.”  She added that

“We consider several factors when deciding which articles should be open to comment: news value of the story; whether we can moderate the comments in a timely way; and whether we have recently hosted comments about the issue explored in the article. On average, comments are left open for 24 hours. We do close comment threads when we believe a discussion has run its course.”

The Times’s website notes that “Verified Commenters,” commenters with “a track record of high-quality comments,” get to post “without moderation.”  Those commenters also must provide the Times with their “real identity.”

Check out the full Q & A here.