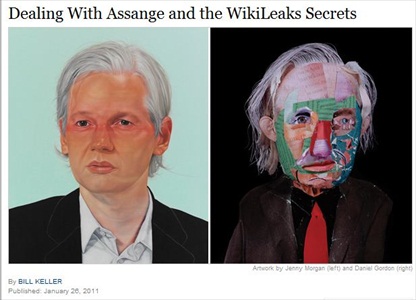 Keller’s report “is adapted from his introduction to ‘Open Secrets: WikiLeaks, War and American Diplomacy: Complete and Expanded Coverage from The New York Times,’ an ebook available for purchase at nytimes.com/opensecrets.”

Keller claimed about WikiLeaks:  “By the end of the year, the story of this wholesale security breach had outgrown the story of the actual contents of the secret documents and generated much breathless speculation that something — journalism, diplomacy, life as we know it — had profoundly changed forever.”

“Although it is our aim to be impartial in our presentation of the news, our attitude toward these issues is far from indifferent. The journalists at The Times have a large and personal stake in the country’s security.

Keller’s report details the background of the New York Times’ relationship with Julian Assange and WikiLeaks and some of the issues and problems that popped up throughout the months.  He confirmed that The Guardian’s editor, Alan Rusbridger, invited the Times — with Assange’s consent — to work with The Guardian and WikiLeaks on document dumps – to look at the the Afghan and Iraq War Diary documents.

Keller explained that the Times sent Washington bureau reporter Eric Schmitt to England to “get a sense of the material” with The Guardian and WikiLeaks.  Schmitt called the information “fascinating” and “genuine” and reportedly described Assange to the Times. Keller recounted Schmitt’s thoughts:

“‘He’s tall — probably 6-foot-2 or 6-3 — and lanky, with pale skin, gray eyes and a shock of white hair that seizes your attention,’ Schmitt wrote to me later. ‘He was alert but disheveled, like a bag lady walking in off the street, wearing a dingy, light-colored sport coat and cargo pants, dirty white shirt, beat-up sneakers and filthy white socks that collapsed around his ankles. He smelled as if he hadn’t bathed in days.'”

Keller noted that the newspaper talked with lawyers about the documents and ” we were confident that reporting on the secret documents could be done within the law, but we speculated about what the government — or some other government — might do to impede our work or exact recriminations.”

According to Keller, the Times decided “from the beginning” that it would redact any information “that could put lives at risk” or could “reveal ongoing intelligence-gathering operations, military tactics or locations of material that could be used to fashion terrorist weapons.”

Keller reiterated that the Times “regarded Assange throughout as a source, not as a partner or collaborator, but he was a man who clearly had his own agenda.” He further described Assange as “elusive, manipulative and volatile (and ultimately openly hostile to The Times and The Guardian).”

“The Times’s relationship with our source had gone from wary to hostile” with the publication of the Iraq War documents, according to Keller.  In particular, the Times “declined to link our online coverage of the War Logs to the WikiLeaks Web site,” a move that did not endear Assange to the newspaper.

“The final straw [in the Times’ relationship with Assange] was a front-page profile of Assange by John Burns and Ravi Somaiya, published Oct. 24, that revealed fractures within WikiLeaks, attributed by Assange’s critics to his imperious management style. Assange denounced the article to me, and in various public forums, as ‘a smear.'”

By then, Assange had been “transformed by his outlaw celebrity,” Keller commented, noting Assange had dyed his hair and stepped up his wardrobe.

“I came to think of Julian Assange as a character from a Stieg Larsson thriller — a man who could figure either as hero or villain in one of the megaselling Swedish novels that mix hacker counterculture, high-level conspiracy and sex as both recreation and violation.”

Regarding the leak of the diplomatic cables, Keller stated that Assange told The Guardian “not to share” the documents with the Times and that he “opened discussions” with the Washington Post and McClatchy “as replacements for the Times.”

According to Keller, “The Guardian was uncomfortable with Assange’s condition.”  Further, journalist Heather Brooke had gotten a copy of the cables “from a WikiLeaks dissident” and “over the coming weeks, batches of cables would pop up in newspapers in Lebanon, Australia and Norway.”

As a result, “David Leigh, The Guardian’s investigations editor, concluded that these rogue leaks released The Guardian from any pledge, and he gave us the cables.”

Keller reported that Washington bureau chief Dean Baquet “gave the White House an early warning on Nov. 19.”  Baquet and “two colleagues” met with “representatives from the White House, the State Department, the Office of the Director of National Intelligence, the C.I.A., the Defense Intelligence Agency, the F.B.I. and the Pentagon” in an “off the record” meeting.

The New York Times may implement a “drop box for leakers,” MediaBistro reported.  The drop box would “allow people to anonymously submit large files which would be vetted by the paper, and if deemed worthy, published to the public.”  And, StinkyJournalism wonders, would the dropbox perhaps allow the Times to avoid working with and relying on WikiLeaks and Assange?

“A small group from computer-assisted reporting and interactive news, with advice from the investigative unit and the legal department, has been discussing options for creating a kind of EZ Pass lane for leakers,” Keller is quoted as telling YahooNews.

Keller explained that the newspaper is “looking at something along those lines” as the Al Jazeera Transparency Unit.